Let Crested Butte, Colorado, Moab, Utah and dozens of other Western towns compete for the title of “Mountain Bike Capital of the World.” The folks in Jackson Hole know better. The variety and challenge of mountain biking in greater Jackson Hole (see our 40K map) is as good as it gets. Any mangy moose will agree.

Let us take you through a few rides in Jackson, ranging from easy (see Biking Jackson Hole’s scenic route: Antelope Flats ) to the dangerous. Although it’s outrageously expensive, we found the best mountain bike map of the area to be Adventure Cycling’s Mountain Biking in the Jackson Hole Area ($10.50 at Hoback Sports in town). Two dozen rides, from Jackson Lake to the north to Alpine Junction to the south, are detailed on this map. Friendly advice and rentals are available from Mark at the Boardroom in Jackson.

This ride, nearly 23 miles, offers the best of all worlds — wide jeep trails through a beautiful canopy of conifers, steep single track to high alpine meadows, and a heavenly descent. Leaving from the base of Snow King Mountain in Jackson, the wide trail follows Cache Creek through cool, dense forest. The trail quickly becomes steeper, easing a bit as it nears its junction with Game Creek. Along the way, several small, clear streams feed into Cache Creek. The short steeps of this section of the trail are forgiving, never long enough to completely scorch one’s lungs. 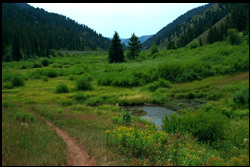 Crossing a footbridge over the Cache, the trail becomes very steep for about 100 yards before easing a bit. Another half-mile of uphill work leads to a high saddle, bisecting a beautiful, verdant meadow. From here, the few miles of uphill climb pay off in a big way with nearly five miles of the best downhill imaginable. Although a little rocky at the top, the trail becomes hard-packed sand, plummeted the biker magically down a twisting, perfectly banked trail. Brakes? Forget ’em. The only dilemma is — Do you savor this incredible course of downhill nirvana, or stop to enjoy the visual feast of lush mountain splendor? Hey, life is tough in Jackson.

Alas, paradise in this earthly dimension is short-lived, and the trail soon meets up with U.S. 191. Pedaling north, slightly uphill, along the wide shoulder, look for the South Park Road turnoff and take a left. This road provides a much more pleasant ride back into town, taking the cyclist through a scenic, shaded lane which reveals the area’s slow, sad evolution from sprawling ranches to tony subdivisions.

This ride involves approximately three miles of lung-melting uphill followed by nearly eight miles of steep downhill, switchbacking down the eastern side of the Teton Range before meeting up with Black Canyon Creek. Unlike the downhill of the Cache Creek/Game Creek Trail, you’ll need brakes in excellent condition, plus your best bike-handling skills.

Two cars are needed for this adventure. From the town of Wilson (about 10 miles west of Jackson), take Wyo. 22 west up Teton Pass. Watch carefully for Old Pass Road. Park one vehicle where Old Pass Road and Wyo. 22 split, then drive to the summit of Teton Pass (8,431 feet) and the trailhead at the parking area on the south side of the road. Before embarking, take a deep breath. The next few miles are a relentless uphill climb. Soon, however, the trail levels out and follows a rolling ridge, entering the forest before reaching a crest which begins the downhill portion of the trail.

From this spot, the wide Snake River Valley stretches invitingly below. The beginning of the trail as it starts its descent is rather tricky, but negotiable. The trail then quickly mellows a bit as it winds back and forth across the mountain through shoulder-high brush. Slicing in and out of the forest, the trail meets Black Canyon Creek. One quickly discovers this creek is well-named — the dense canopy makes darkness out of daylight. It was here, along the creek and off the trail about 25 yards, that we ran across a huge mama moose with one of her calves — not a good situation, as female moose are known to charge and stomp if they feel threatened. We slowly moved back, trying to place ourselves behind a tree. The magnificent beast stared at us for a moment, then moved along stepping over fallen trees, followed by her less-agile offspring.

Moving on, the trail crossed the creek several times, before turning north and meeting up with Old Pass Road.

South of Jackson from Hoback Junction, U.S. 26/89 leads to several trails in Targhee National Forest. Following U.S. 26/89 to U.S. Forest Service Road 31000, take a right, then a quick left into a campground. The trails here are not well-marked, but with a little navigation, the Dog Creek Trail can be found by guerrilla cycling due west on a jeep road overgrown with wet, tall grass. 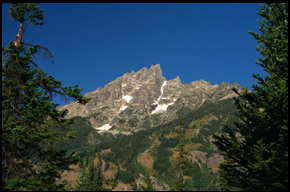 This trail is relatively flat, although its fairly technical single track will test your skills. Following Dog Creek into the Snake River Range, the terrain consists of low hills, thick with Engelmann spruce, eventually leading to the base of Indian Peak (9,683 feet). While lacking the drama of the above two rides, the technical Dog Creek Trail is especially good early in the morning as this portion of the Snake River drainage wakes up and comes alive.

Cyclists looking for company on these trails, besides the occasional giant moose, will be disappointed. Perhaps Jackson is too well known for its fishing, hiking and scenic highways. For shame.
David Iler