Modern-day skiing in the United States blossomed soon after World War II, and in many ways is a direct outgrowth of that conflict. One of Colorado’s finest backcountry tours, the Trail of the Tenth, was actually the WWII training ground for a famous group of ski pioneers. 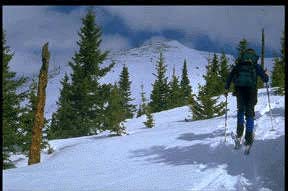 The 87th Regiment, which would later become the elite Tenth Mountain Division, trained at a remote encampment high in the Colorado mountains. Camp Hale, the site of the training, was between the old mining town of Leadville and the Eagle Valley, which would later become Vail. At that time, the entire Eagle Valley had only a handful of old mining cabins and homesteads. It’s difficult to imagine how the valley looked only 40 years ago given the explosion of development that is Vail and the Eagle Valley.

Camp Hale hosted as many as 10,000 troops during World War II. The idea of training an elite unit, skilled in the rigors of winter mountain travel, was initiated by Minot Dole, founder of the National Ski Association, who recognized the value of such a unit during an early WWII conflict. He convinced Army Chief of Staff George C. Marshall, and the 87th Mountain Infantry Regiment and the Tenth Mountain Division was born. The site was selected because of its isolated mountainous terrain and its convenient access to rail and highway facilities that served Leadville. Troops were often required to spend the night out in the dead of winter when temperatures dipped to -40 degrees. Most troops were issued a pair of skis in addition to their uniforms and rifles. The training paid off when the men were called into the heart of the action in Italy and assigned to spearhead some of the deadliest conflicts of the war. Although casualties were high (992 men were killed), the unit was extremely successful and Gen. Mark Clark called the Tenth the finest division he’d ever seen.

After the war, Camp Hale was dismantled, but the veterans of the Tenth Mountain Division went on to become extremely influential in the development of Colorado’s ski industry. Aspen, Vail, Arapahoe Basin, Loveland, Breckenridge, Steamboat and Winter Park were either started or heavily promoted by Tenth Mountain Division veterans. Their combination of entrepreneurial finesse and a deep love for skiing transformed Colorado into the ski mecca it is today.

One of the old training runs the troops were required to negotiate is a strenuous tour now known as the Trail of the Tenth. This exciting tour features breathtaking views of the Sawatch Range to the south and Mount of the Holy Cross directly to the west, spectacular glade skiing, and finally, a fast descent down a twisting trail to the Tennessee Pass road — all within 6.5 miles. A graph of the elevation gain and drop of this trail would look like a pyramid, steeply accumulating all the elevation in one steady climb, while losing it with equal efficiency.

Start skiing from the ski area parking lot east-northeast on the Barton Ditch roadbed. Travel this level road for several hundred yards until a trail forks north across the drainage. This turnoff is marked by a sign indicating the Tenth Mountain Trail. Begin climbing up the west (left) side of Piney Gulch on an obvious trail marked by trailblazes. The trail follows the contours of the main creekbed moving in and out of thick stands of trees, allowing glimpses to the south of the Sawatch Range. The route climbs steadily into larger clearings before it bends north up a tributary of Piney Creek that follows the line of clearings. Direct your skis almost due north, tracing the meadows that reach all the way up to the saddle lying to the east of Taylor Hill. Although the last portion of this climb is fairly strenuous, the view from the high point is well worth the elevated respiratory rate.

Once you are on the Taylor Hill ridge, ski west through small openings in the dense trees. If you are unable to follow the exact path of the trailblazes, don’t fret. Simply follow the crest of the ridge as it heads gently west up to the actual summit of Taylor Hill (at 2.7 miles). From this vantage point, a magnificent mountain panorama fills the horizon, a view few skiers see.

Push along the crest of the ridge heading northwest, staying on the ridge. The descent from the ridge is long and carries you through a forest of varying density. Choose the path of least resistance, continue down past the first roadbed that you encounter (4.2 miles) and eventually reach the second road at 4.9 miles, which you follow back to Tennessee Pass road. Beginning as a gentle climb around to the southwest, this mild-mannered road turns into a screaming and twisting downhill joyride. After you survive this stretch, a final short flat section delivers you onto the east edge of U.S. 24. Car shuttle or walk three miles back to the top of the pass.
Kurt Lankford
Photo by Maryann Gaug