Most Rocky Mountain resort towns teem with mountain bikers in the summer. Red River, New Mexico, however, can be a lonely place for a cyclist.

This beautiful town, nestled in the southern Sangre de Cristo mountains in northern New Mexico, is surrounded by dense pine and spruce forests occasionally criss-crossed by trails and old mining roads – perfect terrain for mountain bikers. But during a weekend in the middle of June, Red River was noticeably devoid of mountain bikers. That’s not to say the town was empty, however.

Red River has all the warning signs the wary mountain biker notices when entering unknown territory. The several jeep tour outfits in town are the first signs of danger. Legions of out-of-state RVs are the next warning sign. Also disturbing was the fact that hardly anyone in town seemed like a local. If even the locals don’t show up to at least harass la touristas, you know something is awry.

During our stay, a religious “encampment” from Texas, with plenty of shiny, happy devotees, had pretty much taken over town. Yes, Red River was clean as a whistle and a little bit tacky – even better reason to hit the nearby trails.

After a few switchbacks, far from the RV beasts below, the valleys and tall peaks of the Enchanted Circle are revealed.

Red River is in Carson National Forest, about 50 miles to the northeast of Taos, and this section of northern New Mexico is often bypassed by visitors headed to Taos or Santa Fe. The Red River Ski Area attracts skiers in the winter looking for a tamer downhill experience than the fabled slopes at Taos.

Wheeler Peak, at 13,161 feet, is New Mexico’s highest peak and dominates the high-country views to the south of Red River. The marketing folks in northern New Mexico have christened this area the “Enchanted Circle.” For the mountain biker, this area is certainly filled with enchantment, once you scoot out of Red River. For those who are under the impression that New Mexico is a hot, dry desert, this slice of the state will quickly dispel that myth.

Old Red River Pass
This excellent dirt pass road is an quick route into the high country above Red River. The pass is two miles south of town off NM 578 on the left. 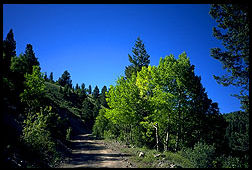 The road, Forest Service 488, is well-marked. Cyclists can either park in town and ride to FS 488, or there are a few places to park off NM 578.

Old Red River Pass immediately climbs through aspen groves, switchbacking across the hill several times. The grade is a comfortable, steady uphill climb. After a few switchbacks, far from the RV beasts below, the valleys and tall peaks of the Enchanted Circle are revealed. Wheeler Peak to the south was crowned by large snow fields in June. Vast sweeps of dark green forests roll toward the south and west.

Temperatures were pleasantly cool during this crystal-clear morning, and the uphill climb was invigorating but not lung-burning. While we expected to encounter jeeps full of tourists along the way, just one local pickup truck passed us on this section of the trail. Several empty beer cans, however, littered the road.

From the top of the pass, cyclists have the option to ride left, or north, on FS 488 which meets NM 38, or turn right into 4th of July Canyon, which we followed. Plenty of rolling terrain kept the thrill level up as the trail became double-track. Sections of the trail were canopied by towering aspens. Further on is Foster’s Park, a lush, green meadow ringed by colorful wildflowers. Down the trail, we encountered two friendly local men cutting and gathering firewood. Further along the trail were others in all-wheel-drive vehicles. One group of New Mexicans were off for a day of four-wheel exploration. All were pleasant and friendly.

The route descended to a ridge above 4th of July Canyon, then dropped quickly to meet NM 578. The road back to Red River is a fast, screaming downhill delight. 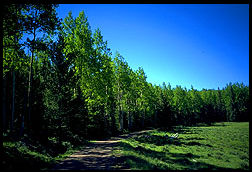 This route is approximately 12 miles and took nearly three hours to complete (with many stops).

An excellent source for other rides in the area is “The Mountain Biker’s Guide to New Mexico,” by Sarah Bennett (1994: Menasha Ridge Press and Falcon Press).

Back in town, one local woman grumbled about the tourists, who, she said, weren’t eating in the restaurants, staying in local hotels, and drinking in the bars. Well, what did she expect? Dutifully, I stepped into the Bull O’ the Woods for a beer. The bar was lifeless and drab. No wonder nobody stopped in. Red River powers-that-be could learn a thing or two from towns like Grand Lake, Colo., which have injected a little quasi-authentic mountain man/cowboy chic into town. Red River certainly has the scenery, locale and history, but something seems missing – a little soul perhaps.

Red River shares the raucous history of most Western mining towns, and the local museum, although extremely sparse, displays some artifacts from the Old West days. Today, tourism and the hideous molybdenum mine to the west drive the economy. For the mountain biker willing to scratch beneath the crass, dull tourist veneer in Red River, miles of vast, uncrowded trails are here to explore.
Story and photos by David Iler