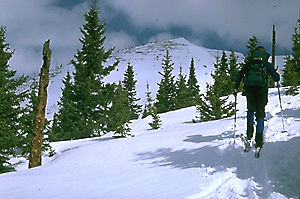 For some, winter recreation means driving to a ski resort, paying for a lift ticket, and skiing groomed runs. Others, however, seek a purer outdoor experience. These people head to the “backcountry” of Colorado.

Colorado’s Front Range offers many opportunities to get into the backcountry for skiing, winter hiking and snowshoeing. From Cameron Pass northwest of Fort Collins to Golden Gate Canyon State Park northwest of Golden, there are several “points of entry” into spectacular scenery and trails you won’t see from the chairlift at a ski resort. At the same time, however, backcountry use is skyrocketing, and at some trailheads it isn’t unusual to find many cars on a weekend morning. Solitude is becoming a prized experience even in the backcountry

In addition, as Jeff Lukas, information specialist for the Boulder Ranger District of Roosevelt National Forest, pointed out, snowshoe use on backcountry trails has greatly increased over the past few winters. “The more difficult the trail, the more snowshoers you’ll find relative to skiers,” he said. The prevailing trail ethic is for snowshoers to make a separate trail to the side of ski tracks, if possible. “Trampling on a ski trail really decreases the value of the experience for skiers,” said Lukas.

The primary, closest backcountry areas are in the following areas: Cameron Pass off Colo. 14 west of Fort Collins, Rocky Mountain National Park, Roosevelt National Forest and Golden Gate Canyon State Park. Most park rangers are eager to share information about trails and conditions with the public, and it’s best to have at least one or two maps of an area you’re visiting. Many areas fall within avalanche zones and rangers strongly suggest visitors call the Colorado Avalanche Center at (303) 482-0457 before embarking into the backcountry.

Cameron Pass area
In the Roosevelt National Forest and Colorado State Forest, approximately 47 miles west of Fort Collins on Colo. 14, the Cameron Pass area offers a number of trails suitable for both backcountry skiing and snowshoeing. Good early season skiing may be found on the Michigan Ditch/American Lakes, Zimmerman Lake, Silver Creek and Sawmill trails. Late season skiing (April or later) may be found on Zimmerman Lake, The Meadows and Cameron Connection trails.

The Bear Lake parking lot in Rocky Mountain National Park is an excellent point of departure for several trails suitable for snowshoeing and backcountry skiing.

The easiest trail in the area is Michigan Ditch, a 2.5-mile (one-way) trail that starts at Cameron Pass opposite the parking area, in the Colorado State Forest. This wide trail has views of the Nokhu Crags.

Cameron Connection is a easy-to-moderate trail that departs from the Cameron Pass parking area. This 2-mile (one-way) trail travels through meadows and fir/spruce forests and offers views of Diamond Peaks.

The Meadows is a 5-mile (one-way) trail marked with blue diamonds departing from the Long Draw or Zimmerman areas. New snow will make this moderate route difficult to follow, and skiers/snowshoers should be proficient with a map and compass. This narrow trail goes through dense forest interspersed with meadows.

For more information about trails in the Cameron Pass area, call the Estes Poudre/Red Feather Ranger District of the Roosevelt National Forest at (970) 498-2770.

Rocky Mountain National Park
The Bear Lake parking lot in Rocky Mountain National Park is an excellent point of departure for several trails suitable for snowshoeing and backcountry skiing. Conditions in the park are often windswept. The Bear Lake to Hollowell Park trail is from one to three hours in length (one way) and is marked with orange markers. It’s recommended for advanced beginners.

For expert skiers, the Glacier Gorge Junction to Loch Vale or Glacier Gorge route from Bear Lake offers steep climbs. Skiers should allow four to six hours out and back to complete this trek.

Roosevelt National Forest
Eight miles from Rollinsville, at the east portal of the Moffat Tunnel, is a northern route to both Forest Lakes and Arapahoe Lakes. The trail to Forest Lakes is approximately 6 miles roundtrip. This trail is often crusty, but can be excellent after a snowfall. To the south is a route to Ranger Pass and Ranger Lakes. According to Lukas, this trail has seen increased use by snowshoers. For skiers, the steep, winding trail can be difficult, although snowshoers will find the trail relatively easy.

Thanks in part to the Colorado Mountain Club, the area around Brainard Lake west of Ward offers several well-marked, excellent trails for ski touring and snowshoeing. The road from Ward to the Brainard Lake parking area is plowed. From the parking area, the Waldrop North and Waldrop South trails begin. Although heavily used, this routes offer excellent views. The trails are 2.6 and 2.8 miles (respectively) one-way to Brainard Lake. Experts may consider extending these routes west to Mitchell Lake or Long Lake. Also offering a more challenging and steep route is the LIttle Raven trail, which winds south of the Waldrop South trail before heading to Brainard Lake.

As with all trails mentioned here, “the further you go, the less people you see,” said Lukas.

Eldora
The greater Eldora area offers several options for the backcountry and cross country skier, as well as snowshoers. Eldora, of course, is home to Eldora Mountain Resort, which maintains 45 kilometers of cross-country trails. “We’re one of the largest cross-country facilities in the state,” said Rob Linde, marketing/public relations manager for Eldora Mountain Resort. A trail pass is $12.

The trail network winds around the base of Tennessee Mountain. At the top of the trail system, after a fairly steep 3- 4-mile uphill climb, is the Tennessee Mountain Cabin, which is available for parties to reserve overnight. The cost is $75 during peak times (i.e. weekends and holidays) and $65 during the week. According to Linde, the cabin will sleep four comfortably; six people can possibly squeeze in. The cabin includes a wood-burning stove and there are tools to chop wood.

“Full moon nights go quickly,” said Linde, adding that nights during the week are the best to reserve the cabin. Skiers can make reservations by calling Eldora’s Nordic center.

For those seeking a little more wild of an experience, the Jenny Creek and Guinn Mountain trails in Roosevelt National Forest are popular backcountry destinations. These trails are for intermediate to advanced skiers, with Guinn Mountain being the more advanced of the two. Both trails begin at the east parking lot of Eldora Mountain Resort. The Guinn Mountain Trail splits to the north from the Jenny Creek Trail about 2 miles down the trail.

The Jenny Creek Trail ends up at Yankee Doodle Lake. The trail is approximately 11 miles roundtrip. The Guinn Mountain Trail, is about 10 miles roundtrip and ends at Arestua Hut, which is maintained by the Colorado Mountain Club. (Call 449-1135 for details.) 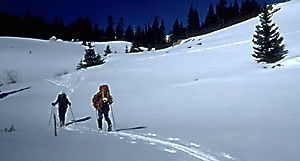 Outside the town of Eldora is the beginning of the Lost Lake Trail, which introduces the skier to several connecting trails with varying degrees of difficulty, including the Devil’s Thumb Trail, Woodland Lake Trail and King Lake. The Fourth of July Trail also splits off the Lost Lake Trail, however it is used by snowmobilers.

According to Lukas, there is a bowl outside of Hessie, a few miles down the Lost Lake Trail, which in late winter is a good place for telemarkers to make a few turns. He also warned that the area around Yankee Doodle Lake is avalanche terrain.

Golden Gate Canyon State Park
“Our park is great for snowshoeing,” said park ranger Rick Gardner. Sixteen miles northwest of Golden, Golden Gate Canyon State Park offers a number of trails. Gardner pointed out that many trails are a little tight for skis. Determined skiers should consider trails in the northern end of the park, suggested Gardner. A map for the park is available at the visitor’s center.