Editor’s note: Since this article was published, many disturbing accounts of polluting practices by the cruise ship industry have come to light. We urge those considering cruise vacations to research the environmental records of the cruise line companies they’re considering. More information may be found at the Ocean Conservancy Web site. 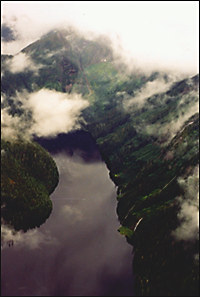 On a warm and pleasant sunny day at the end of August, we flew into Vancouver, British Columbia – the first leg of a cruise through southeast Alaska’s Inside Passage. We sailed aboard the 2,000-passenger Norwegian Wind – our home for one week as we traveled north to Juneau, Skagway, Haines and Ketchikan.

Vancouver was a charming city with a dramatic backdrop of stately mountains and an active waterfront. Sailing out of port, we passed busy Stanley Park as the city’s skyline slowly dwindled in size. Civilization soon disappeared as we maneuvered through coastal passages with islands and fjords bordering the Johnstone Straight. From this point forward, forests of ancient pines covered almost every inch of land we saw.

We reached Alaskan waters just before midnight during the second day of sailing, but it wasn’t until daybreak before we were finally able to see Alaska. It was all black-and-white with shades of gray. Low clouds hugged the land on either side of us, while an occasional fishing boat passed in and out of sight.

Southeast Alaska was rugged and solemn, and much of the time during our visit it was cloudy, rainy and gloomy. Its history is rich with gold rush memories, native Indian heritage and courageous early settlers. As we traveled, two knowledgeable naturalists, a husband-and-wife team working for the cruise line, dispensed interesting tidbits about the areas we entered and alerted us of wildlife sightings.

As the Norwegian Wind sailed for its first port-of-call, whales were spotted during breakfast in the two-story glass walled dining room. Orcas jumped sideways out of the water, then splashed back in, spraying vapor into the air from their blowholes. These incredible black-and-white creatures were exciting to watch, even on a misty day. Bill, the naturalist, then announced that humpback whales were spotted on the starboard side and we left breakfast to hunt for them, binoculars in hand. They were different both in their movements and soft gray color. 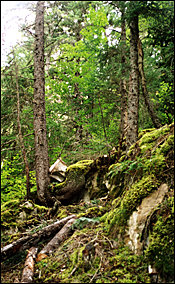 By early afternoon we reached Juneau. As the capital and Alaska’s third largest city, Juneau is accessible, in true Alaska fashion, only by water or air. Enormous Mt. Juneau towers over the little city, and seaplanes took off one after the other on the water.

The view was bleak as rain clouds covered both sky and mountain tops. It was also chilly with a rainy mist, and our ponchos proved handy. Since the ship was anchored offshore, we took a launch to the dock. The disembarkment was much smoother than I feared and the short ride was pleasant.

My husband and I had extra time to explore Juneau before our scheduled helicopter ride into nearby Mendenhall Glacier. Our first stop was the Taku Fwash Marketplace, close to the pier. Large windows on one side of the store’s sales room allowed us to watch workers in all stages of preparing fish. We ordered and shipped several pounds of salmon and halibut.

Visibility was poor as we began our walk through downtown. Suddenly, a bright red trolley car appeared and beckoned us to hop on, out of the rain, for an $11.50 guided tour around the area. They stamped our hand so we were able to jump on and off at various stops. However, Juneau is not very large and the ride turned out to be a mere 15 to 20 minutes – not a bargain. We got off at the Alaskan State Museum, which was well worth the $4 admittance. They even have lockers to store wet ponchos and jackets.

The steady rain became a downpour as weather worsened. Changing plans slightly, we decided to take a two-hour taxi to Mendenhall Glacier Park. A van appeared driven by Sky, the driver/guide, who gave us a rundown on the area.

Mendenhall Glacier Park
Only a lake separated us from the motionless river of blue-tinted ice, which abruptly stopped to meet the water before us. A few icebergs floated around and a fast-moving waterfall cascaded along the glacier. There was a nice visitors’ pavilion here, in the process of being expanded, and a winding walkway to the water’s edge.

Panning for Gold
We hit the trail up a steep 300-foot mountain and into the woods. We passed quaint little houses huddled together, then walked across a rickety narrow bridge to reach a remote stream where we panned for gold. Sky supplied us with pans and showed us how to hunt through the pebbles and dirt for gold nuggets. No one founds a single gold nugget, not even Sky, but he speculated the streams were higher than usual with all the rain. However, I found a pebble with golden streaks and I’m sure if we looked more carefully we could’ve easily found more. 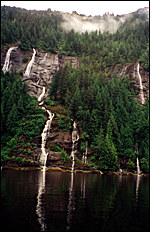 Skagway, our most-northern destination, greeted us bright and early Thursday morning. It was again windy and chilly, but the sun moved in and out of clouds all day. Skagway, because of its railroads, is final port-of-call for cruise trips, and the point of origin for land excursions. There was just one main street seven blocks long. Originally a gold mining town, its pioneer buildings are still standing, now quaint gift shops painted brightly side-by-side. Tourism is king here, and once the season ends, only 400 residents remain.

We had a choice of 16 trips and adventure excursions in Skagway. The “Hike in a Rain Forest with Raft Trip” was our selection. A van transported 10 of us from our dock to Dyea (pronounced Die-E), just around the mountain bend from Skagway. This ride gave us a chance to take in local scenery while our driver/guide Brandon pointed out area features and history. As we headed for the Chilkoot Trail he told us that the creamy green water we were passing was fresh from a glacier.

Arriving at the trailhead, I became worried about the steepness of the rugged climb ahead. It’s rated as “moderate” but this looked rather tough. We used bulging rocks and tree roots as steps to climb higher and higher. We stopped and rested after each steep assent, while Brandon and another guide described the features within this lush green forest. There are many unusual wild bushes, trees and plants. The second half of the hike took place on a flat, comfortable path of pine needles. It was here where our guide pointed out bear droppings on the path ahead and a huge eagle’s nest built of large twigs high atop a leafless tree. As we headed for our raft at the water’s edge we spotted an eagle and were totally impressed by his stateliness. Several eagles were seen again as we floated down the glacier-fed Taiya River in an 18-foot rubber raft. Coming ashore, another guide greeted us at a picnic table full of smoked salmon and hot chocolate, which we devoured. More eagles were spotted flying around a water area as we departed in our van.