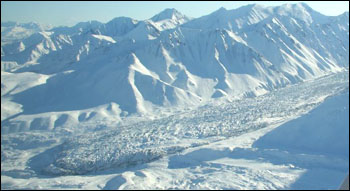 A University of Alaska Fairbanks glaciologist reported that a glacier in the central Alaska Range has advanced rapidly, an event referred to as a “surge.”

The McGinnis Glacier surge was observed by Martin Truffer, associate professor of physics with UAF, who noticed that the lower portion of the glacier was covered in cracks, crevasses and ice pinnacles — evidence that the glacier recently moved forward at higher-than-normal rates.

It was not clear whether the McGinnis Glacier continues to surge.

According to an article published by the American Geophysical Union, Measuring a Moving Glacier, glacial surging is a “periodic, rapid movement of large quantities of ice within a glacier, alternating with much longer periods of stagnation or retreat.” 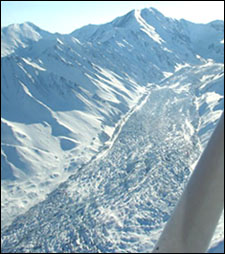 Surge events last less than one year and occur periodically, between 15 and 100 years, according to the National Snow and Ice Data Center’s glossary.

Following the 2002 Denali Fault earthquake, there were reports that the McGinnis Glacier was covered with debris after several landslides on Mount McGinnis. Otherwise, there is little historical information about the glacier.

Flying above the glacier in a small aircraft last month, Truffer and colleague Will Harrison, professor emeritus at UAF, confirmed the signs of the glacier’s surge.

While glacial surging is generally rare, there are several glaciers in the Alaska Range that have surged, including Black Rapids Glacier, which advanced to within a half-mile of the Richardson Highway in 1936.

Other Alaska glaciers that have surged include the Bering Glacier in southern Alaska (discussed in the AGU article referenced above), the Columbia Glacier and the Hole-in-the-Wall Glacier.

Two historical photos of the latter two glaciers, posted on the NSIDC Web site, show them knocking over trees as they advanced.