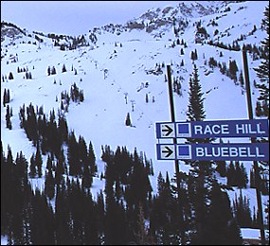 Some skiers watch the snow reports like investors watch the daily stock reports. Instead of earnings-per-share and stock price, however, hard-core skiers scan the ski reports for snow depths and new snow accumulations. But the quest for Rocky Mountain powder, the Holy Grail of skiing, can be an elusive one. Like an undervalued stock screaming for attention, Utah ski areas, with their gaudy snow depths, are “investment grade” choices for discriminating skiers bent on skiing powder.

For this Colorado skier, hopelessly spoiled by Rocky Mountain powder, the ski season doesn’t really begin until Mother Nature has met a few key requirements. For starters, a 50-inch base usually means most of the mountain at most ski areas is open. It also means one can slip into the trees without too much concern about stumps and logs ruining the day.

This season, while Winter Park and Steamboat have received the lion’s share of Nature’s snow largesse in Colorado, the rest of the state of Colorado, up through the end of January, was left begging for more.

When this happens, our eyes turn west to our neighbor Utah. While Colorado resorts have slowly reached the magic 50-inch base mark, Alta and Snowbird were pushing 80. So before Utah welcomed the world for the 2002 Olympics, we snuck into Utah to sample the best snow depths in the West.

Our destination — Alta Ski Area, the legendary ski haven in Little Cottonwood Canyon of the Wasatch Mountains outside of Salt Lake City. By late January, Alta had accumulated a 75-inch-plus base, far above Colorado ski areas.

Alta is a throwback to the days before ski areas morphed into “ski and summer mountain resorts.” Bucking industry trends, lift prices remain low ($38 for a full day ticket), snow boarders are not permitted on the hill, and crowds, on our weekend visit, were relatively small. Alta sits in the narrow Little Cottonwood Canyon at a base elevation of 8,530 feet, rising 2,020 feet at its highest lift-served spot.

The area, with 2,200 skiable acres, sprawls horizontally across several Collins Gulch and Albion Basin, divided by many ridge faces, offering lots of varied terrain (25 percent rated beginner, 40 percent intermediate and 35 percent advanced). Views from the area, which we were able to glimpse just briefly during our generally cloudy two-day stay, were spectacular, with dramatic, sharp peaks rising all around this vantage point in Little Cottonwood Canyon.

Our first day at Alta was cloudy and very windy, as an approaching storm (which promised between 10 and 20 inches of snow in the mountains outside of Salt Lake) was being ushered in by fierce gusts and wind-packed conditions. The previous night, it had been so windy on the mountain that some of the runs were littered with pine cones and small branches. On the plus side, the winds had blown snow into moguls, creating nice, soft places to turn.

Alta’s decent snow base and resulting good overall coverage of the mountain made up for the lack of powder. Still, the crusty snow and flat light conditions on the first day made precise turns a must.

From the base area referred to as Wildcat Base, two double lifts, Collins and Wildcat, bring skiers to mid-mountain. From the top of these lifts, a quick run down to Germania lift provides access to the rest of the hill, including area served by the Sugarloaf and Supreme lifts.

On our first day, we found the place to be on the mountain was the Supreme lift. Several expert and advanced runs start at the top of this lift, some offering excellent tree bashing. While much of the snow was wind-packed and crusty, soft snow could be found in the trees on the Challenger and No. 9 runs. Big Dipper, Rock ‘N Roll and Sleepy Hollow offered fast, intermediate runs with good pitches.

The 80-plus inch base made forays into the trees possible without fear of thin coverage.

After several runs braving the bracing winds, we decided to spend the afternoon on the lower mountain lifts — Collins and Wildcat. Collins is a little more exposed to the elements, but both the Blitz and Taint runs off to the left of the chair compensated for the blustery ride up the hill. Taint, although groomed, had a nice steepness and made for a fast, turn-and-burn run with snow loosening up a bit by afternoon.

Because of the horizontal layout of Alta, some of the blue runs seemed to be roads to other lifts. Navigating around the mountain was fairly easy with good signage, and many expert runs were marked with gates. Views from the top were spectacular, although the cloudy conditions didn’t illuminate the far peaks as surely they must on a sunny day. Uinta Range was visible at top of Supreme off in the distance.

On our second day at Alta, the snow gods smiled upon us, as a long-anticipated major storm moved through greater Salt Lake. At the Alta base, snow started falling early in the morning, and by the time lifts opened, 3 to 6 inches of powder covered the hill. As we found, and with the aid of wind, accumulations of 8 inches and more of powder could be found in various nooks and crannies on the hill. 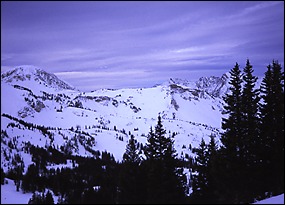 At the top of the mountain, near white-out conditions prevailed, sending the skier into a bizarre, perception-defying world of white. It was difficult to plan more than three or four turns at a time, but the fresh, soft powder made the effort worthwhile. As on the previous day, we found the runs served by the Supreme lift to be the best.

Winds off the mountain grew more fierce as the day progressed, but the allure of discovering untouched powder runs kept us on the hill.

Our accommodations at Alta, at Gold Miner’s Daughter, were more than adequate, without being extravagant. The lodge’s location at the base with Collins and Wildcat lifts a few short steps away was very cool.

The cafeteria on the ground floor of Gold Miner’s Daughter, manned by an able crew of cooks, served up excellent fare. Astonishingly, people actually left goggles, gloves and gear at tables as they went to grab food, a subtle indication of the homey, absurdly nice and laid-back atmosphere at Alta.

All the same, this is Utah, so a margarita was hard to find at least at Wildcat Base, but this underscores Alta’s emphasis on skiing.

Alas, we had to return to reality and Denver after the second day and learned a hard lesson the day after. Checking out the ski report the following morning from Denver, we were crushed to read that Alta started the day with 22 inches of new snow, a heart-breaking revelation in a winter where powder has been hard to find.

Lesson learned: with a storm approaching, do what it takes to stay at Alta until the powder-bearing storm spends itself in the bowls, glades and steeps in the upper end of Little Cottonwood Canyon.
Story and photos by David Iler