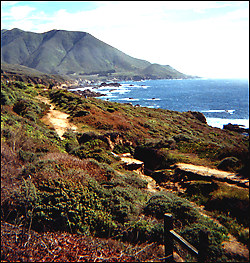 One day as Big Sur resident Jon Libbey sat reading atop Cone Peak, just inside the southern border of the Ventana Wilderness, he heard a deafening thunder and then saw two military jets fly up the canyon below him. The planes flew so close to him, “I could see the helmets and the noses of the pilots,” he says.

If the U.S. Navy has its way, Libbey will be seeing a lot more pilots.

Other Big Sur residents complain of similar disruptions. Brother Gabriel, a monk living at the New Cameldoli Hermitage in Lucia in the southern Big Sur area, says, “The planes sometimes fly below the level of the retreat house. The planes are so low we can see the pilots in the cockpit.” The noise, he says, is “shattering.”

Sometimes Libbey hears jets fly over his rustic cabin tucked away in the foothills of the Santa Lucia mountain range. “You hear this roar and the windows will rattle and the swallows start flying around really confused,” he says.

The ruckus in one of the most beautiful places in the country has galvanized an unusual alliance of environmentalists, ranchers and business folk who are upset with a U.S. Navy proposal to conduct 3,000 practice bombing raids a year at Fort Hunter Liggett, an Army base bordering the Los Padres forest to the east. The Navy is conducting an Environmental Impact Statement as required by federal law.

The training would involved F/A-18 Hornet fighter jets flying missions to the base five days a week, where they will drop inert bombs at a target within a restricted area of the base.

Big Sur residents and visitors alike are drawn to Big Sur, a rugged strip of California’s Central Coast south of Carmel, for its remoteness and peacefulness. Big Sur’s Los Padres National Forest offers some of the best year-round camping and backpacking in the country. Thousands of miles of hiking trails and dozens of backcountry camps dot the 306,757-acre national forest, which envelopes the 201,178-acre Ventana Wilderness. People live here and visit here for the pristine beauty forged from the Santa Lucia Mountains towering above the vast Pacific Ocean, forming breathtaking cliffs pounded rhythmically by dramatic sprays of whitewater. Easy access, mild temperatures, babbling streams and abundant wildlife within the forest attract thousands of hikers a year. But most of all, Big Sur means peace and quiet.

Most of the proposed flights will originate at the Naval Air Station Lemoore, 76 miles to the east of Fort Hunter Liggett. Those flight would not cross the national forest. But 135 flights would be launched from aircraft carriers, flying directly over the Big Sur coastal area. Navy officials assure locals that low-altitude flights won’t occur over Big Sur, the Ventana Wilderness, the California Sea Otter Refuge off the coast of Big Sur, or the San Antonio and Nacimiento lakes and the Pinnacles National Monument lying to the east of the Santa Lucia range.

The Navy contends the plan is nothing new. About 200-300 Navy training flights a year take place at Fort Hunter Liggett. “We’ve been doing this for decades,” says Naval Commander Charles Gillman of Lemoore. “We’re not introducing anything new to the area.” 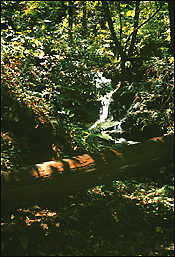 Gillman says he doesn’t know the origin of the reported disruptive flights, but he says they have nothing to do with the training at Fort Hunter Liggett. According to the Navy’s proposal, flights coming off aircraft carriers and from Lemoore will fly at the same altitude as commercial aircraft, some three miles up, while commuting to and from the fort, where they’ll drop to 500 feet for target practice.

However, the Navy’s assurances offer little comfort to locals who say noisy flights already disturb them. If the Navy’s plans do prove to be disruptive, locals are concerned not only about their own peaceful existence, but about the possible impact on the tourist industry as well.

In agrarian, south Monterey County, on the inland side of Los Padres, millions of public and private dollars to promote tourism for wineries, lakes and historical features started pouring forth in the mid-1990s, when it looked like the U.S. Department of Defense would turn Fort Hunter Liggett over to civilians. If the fort, currently used mainly to train Army Reserve and National Guards troops, turns into a practice bombing range, tourists may as well “get a hotel room at San Jose Airport,” says Sal Lucido, president and co-founder of the Ventana Wilderness Society.

And that’s just the impact on humans. Southern Monterey County also happens to be home to many rare and endangered bird species, including the elusive California condor and the bald eagle. Lucido’s group, which has been releasing bald eagles near Fort Hunter Liggett since 1986, has recorded five eagle nests in the area, one of which actually sits within the fort, while 14 condors inhabit the Ventana vicinity. Noisy jets flights could disturb the birds’ mating and nesting habits as well as put them at risk of in-flight collisions with jets.

So far, it seems the Navy has a battle ahead of them. Local county supervisors as well Farr, California U.S. Senators Dianne Feinstein and Barbara Boxer, and the California Coastal Commission all oppose the plan.

“I’m going to fight this as hard as I can,” Farr says.
Story and photos by Laurel Chesky.