Home of the Ancients

Editor’s note: Below are edited excerpts of President Clinton’s proclamation announcing the creation of the Canyon of the Ancients National Monument. 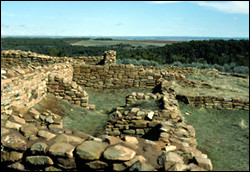 People have lived among these canyons and mesas for thousands of years, from hunters crossing the area 10,000 years ago or more, through Ancestral Puebloan farmers, to the Ute, Navajo and European settlers whose descendants now call this area home. There is evidence that Paleo-Indians used the region on a sporadic basis for hunting and gathering until around 7500 B.C. During the 6,000-year Archaic period, occupation of the Four Corners area was dominated by hunters and gatherers.

By about 1500 B.C., the more sedentary Basketmakers spread over the landscape. As Ancestral Northern Puebloan people occupied the area around 750 A.D., farming began to flourish, and continued through about 1300 A.D., as the area became part of a larger prehistoric cultural region that included Mesa Verde to the southeast.

Year-round villages were established, originally consisting of pit house dwellings, and later evolving to well-recognized cliff-dwellings. Many archaeologists now believe that throughout this time span, the Ancestral Northern Puebloan people periodically collected into larger communities and dispersed into smaller community units. Specifically, during Pueblo I (about 700-900 A.D.) the occupation and site density in the monument area increased. Dwellings tended to be small, with three or four rooms. Then, during Pueblo II (about 900-1150 A.D.), settlements were diminished and highly dispersed.

The 164,000-acre monument, carved out of former U.S. Bureau of Land Management land, contains the highest known density of archaeological sites anywhere in the United States, according to the BLM.

The more than 20,000 archeological sites in the monument include villages, field houses, check dams, reservoirs, great kivas, cliff dwellings, shrines, sacred springs, agricultural fields, petroglyphs and sweat lodges. More than 100 sites per square mile can be found in some areas of the monument. 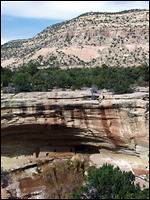 Because of the remoteness of the area and the protection efforts of both the BLM and the local community, the integrity of most of these sites has been maintained.

Clinton said the growth of population and tourism in the Four Corners area will increasingly threaten these resources with vandalism and other types of degradation, making additional protections necessary.

In 1985, the BLM designated the area as the Anasazi Area of Critical Environmental Concern.