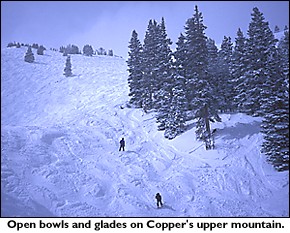 In mid-March, our season-long quest for a powder day in a generally dry season was rewarded when we woke early, checked the ski report, spotted 9 inches of new snow at Copper Mountain, blew off work and hit the road.

We couldn’t have scripted a better day at a better area.

At the west end of Summit County, Copper Mountain anchors what must be one of the world’s best regions (in good snow years) for downhill skiing. With Vail Resorts’ Breckenridge and Keystone ski areas continually upping the ante for more terrain, more condos and more development, Copper and its owners Intrawest have dutifully followed market pressures and added to what was already a top ski experience.

When we first were seduced by the many joys of Colorado skiing, back in the 1980s, Copper had a reputation as a serious place to ski. Its base was tasteful, not ostentatious. Skiing, rather than partying or shopping, was the emphasis at Copper. Long runs, especially under what used to be B1 and B2 lifts, provided thigh-burning, challenging pleasure.

Luckily, not much has changed at Copper, although millions have been poured into the resort to upgrade lifts, add some upper mountain terrain and spruce up the base. What remains is a fantastic ski hill, well-designed and segregated nicely based on difficulty of terrain. Intermediate, expert and beginner runs are generally grouped together on the mountain.

Some have speculated in the past that Copper sits along a banana belt in central Colorado, thereby missing some snow storms as the blow through. However, during the 2001-2002 season, Copper consistently enjoyed better snow than most areas, and the 50-plus-inch base on the day of our visit was among the best coverage in the state.

As in the past, we found the area near the old B lift, now the East Village, to be the best place to base yourself at Copper. Things have changed at this corner of Copper, however, some for the better, some not. Previously, two lifts, B1 and B2, took skiers to the top of the hill. Now, a swift, 6-person chair — Super Bee — whisks skiers to the top, a convenient improvement, but with the capability to dump lots of people on this side of the mountain in a short time. 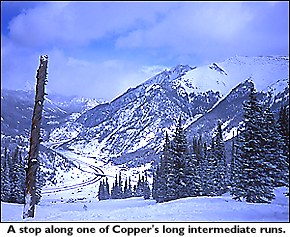 Also, while this area used to be a little-known way to avoid what can be a crowded base area and to park close to the lifts for free, close-in parking is now $15.

On the hill this day, the long cruiser runs under Super Bee lift, Andy’s Encore, Collage and Oh No, were blanketed with soft, Rocky Mountain powder. With 2,450 acres, Copper is big enough to handle lots of skiers while leaving untouched snow for powder hounds well into the day on snow days. (This is more true on weekdays.) Collage in particular, with small moguls in places, is a rewarding top-to-bottom run that illustrates the value of larger areas such as Copper. A nice traverse through the trees, 17 Glade, connects up with Bouncer, which like Collage, is a classic, long cruiser run.

After a warm-up on Collage, we took the American Eagle lift to the Excelerator lift and made our way to Storm King, the poma lift that takes skiers to the fluffy bowls of the Upper Enchanted Forest and the tight glades of Lower Enchanted Forest. It was here that we found the season’s best runs — untracked, mid-calf-deep, soft powder with no one around. This is the ski equivalent of nirvana.

After a few runs of enchantment, the line at Storm King grew and we skied off to explore other nooks and crannies. The Sierra lift, although short, serves Union Bowl with several runs spilling down through thin glades.

Keeping a sharp eye on the trail map is essential at Copper, as its 125 trails allow for lots of roaming and exploring, but also the potential to miss a trail and wind up at an unexpected destination. The mid-mountain lift, Timberline Express, serves a small pocket of intermediate runs, with Little Burn offering an excellent fall line to time turns through powder-strewn bumps. 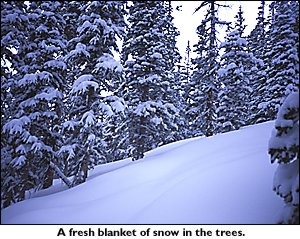 A nice mid-afternoon dusting of powder made the afternoon’s runs even more enjoyable. Both Oh No and Andy’s Encore afford nice forays into the trees, where we again encountered undisturbed powder.

In a ski year that was frankly disappointing, this day at Copper, with fresh snow and a relatively light crowd, fed the burning ski jones that we’d been trying to satisfy all season.

Copper Mountain is 75 miles from Denver, and remains, given good conditions, one of Colorado’s real downhill skiing jewels. On a good powder day, there’s really no other place to be within a two-hour drive of Denver.
Story and photos by David Iler