Golden, Colo. occupies a strategic place on the Front Range. West of Denver, at the very edge of the Rocky Mountains, Golden is bisected by I-70, the main route across the state. Surrounded by mesas and parks, the Golden area offers many good hiking and biking trails, often bypassed by visitors traveling to other destinations.

The northern edge of Golden is dominated by North Table Mountain, a broad, picturesque mesa that is a familiar landmark. With access on the west side of the mesa just off of Colo. 93, North Table Mountain is a convenient place to hike, bike and scope out the surrounding area from a choice bird’s-eye view.

On top of the mesa, a loop trail slices through the middle of the grassy plateau and traces the perimeter of the east and north sides. A side trail from the top offers passage to the south rim of the mesa. 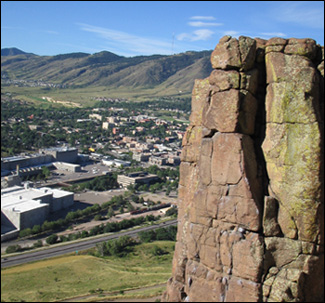 The view from the south side of North Table Mountain.
August 2010

From the parking lot just off of Colo. 93, a very wide, steep cinderpath shoots up the west side of the mesa. On this early Saturday morning in early August, a steady breeze came off the mesa, providing a little headwind going up. This route gains elevation very quickly up to the top, giving the hiker a quick route to the wide, treeless plateau on top.

Once on top of the mesa, road noise from below fades away and it becomes clear one is entering a different zone, a tranquil place above the surrounding towns and foothills.

The flat plateau on top extended straight ahead to the east toward Denver on the plains below. While traversing the mesa, changing views of the plains, towns and landmarks below reminded that civilization is not far away. 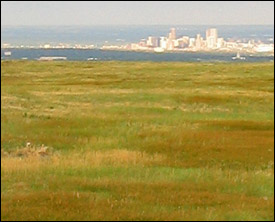 Downtown Denver off the edge and miles to the east of North Table Mountain.
July 2010

At the top of the access cinderpath, to the right, a double-track dirt road with a bushy green center median led south across rolling fields. I embarked on this trail thinking it was part of the North Table Loop trail, which is isn’t. However, it turned out to be a rewarding, off-the-map route to the south rim of the mesa.

Up high on this Front Range elevation, a hazy downtown Denver skyline could be seen to the east. Moving south, the trail turned slightly and pointed directly at Golden landmark Lookout Mountain, with large radio and TV antennas planted on its flanks.

As the road moves closer to the southern edge of the mesa, a spur trial, also double-track dirt, led up to the top of a rise. From that perch, I saw a dramatic view high above downtown Golden, revealing a large brewery, Lookout Mountain, and South Table Mountain and the foothills extending to the south.

This is a classic Front Range view.

Back from the spur and on the main trail on the south side of the mesa, I followed the single-track trail to the southwest, leading to another spot on the outer periphery, a ‘click of the wheel’ counterclockwise on the mesa. On this edge, I could see east to Denver and what appeared to be West Colfax tracing a route in the distance to the big city. A little further up was a side trail leading over the edge of the mesa and down a rocky chute littered with large rocks and boulders. A little steep, but very passable with nice big steps going down. Scrambling across the rocks, I was treated to another great view of Golden.

Back on the loop trail 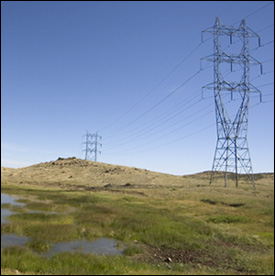 After finding some dead-ends crisscrossing the steep side of the mesa, I hiked back up through the chute to the mesa top once again.

No, this wasn’t the loop trail, but it was well worth exploring.

I hiked back along the trail, retracing my steps, cutting through tall grass amid rocky ground, back to the start of this side trail.

The North Table Loop trail is about 5.4 miles roundtrip, slicing through the middle of the mesa, then along its northern perimeter. The loop includes the Tilting Mesa and Mesa Top trails.

Land to the northeast on the mesa was defined by the large structural steel power line towers placed along the eastern and northern flanks of the plateau. Ironic in a way since the mesa doubtless catches a lot of wind. One wonders, would windmills be productive here?

A small building and radio tower sits on a high rise on the mesa, to the south of Tilting Mesa trail.

On the Tilting Mesa trail, tiny grasshoppers hopped left and right as I approached. There are no trees to be seen up here, and the mid-morning sun is hot.

Following the trail through an opening on the east-northeast perimeter of the mesa, the trail dips down from the plateau and traces the outside of the mesa along the east and east-northeast. West Denver reservoirs can be seen below. 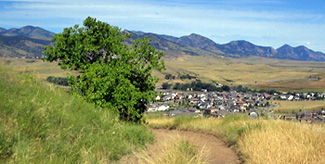 The north side of North Table Mountain.
August 2010

The mesa was slowly revealing another of its sides and faces. The trail switchbacked down from the heights, toward a few horse properties on the plains below. A stiff breeze came in from the north and gradually the Boulder Flatirons appeared in the distance many miles north.

The remainder of the easy, pleasant rolling loop continued through the waist-high grass flowing in the breeze along the the north and west sides of the mountain.

While the trails on North Table Mountain often remind the visitor that the city is not far away, they offer a good retreat from the hustle-and-bustle that surrounds the landmark.
Story and photos by David Iler