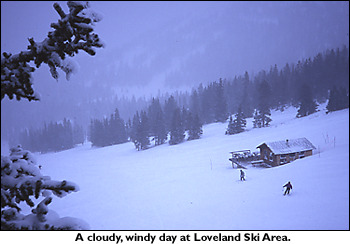 On our way to Copper Mountain one early February Saturday morning, we were stymied by bumper-to-bumper traffic conditions on infamous I-70, which made for a 2-hour drive time from Denver to the Eisenhower Tunnel. With skiing rather than negotiating traffic the goal this snowy morning, we jumped off I-70 and headed for Loveland Ski Area, one of our favorite ski hills, nestled on the east side of the Continental Divide.

Loveland is famous for its inclement, notably windy, conditions. But, on any given day, any Colorado ski area will feel the pain of fierce Rocky Mountain winds. This day, however, lived up to the perception of Loveland as a wind magnet as near-blizzard conditions prevailed.

Nonetheless, Loveland has a secret weapon against Mother Nature when she turns blustery — the legendary Loveland poma!

The poma lift is between lifts 2 and 4, just below lift 6. It’s easy to miss, so new visitors to Loveland must keep a sharp eye out for the loading area. The poma rises from mid-mountain to about three-quarters of the way up the hill. The beauty of the poma is that it slices through a section of trees, shielding skiers from the wind. Excellent, although short, runs are accessible both to the right and left of the poma.

On this day, only lifts 1 and 6, plus the poma, were open in the morning with high winds shutting everything else down. A few inches of powder covered the thin base of 36 inches, and the snow was wind-blown, as it often is at Loveland. Wind-blown snow is crusty on top, with softer snow beneath the top layer. Turning in wind-packed snow is an adventure, as ski edges can catch the crust and send skiers flying, or worse.

But, as often happens, the snow loosened up a bit as the day wore on, becoming softer and more forgiving, and the howling wind blew snow from the trees onto the runs, adding a bit more cushion to the hill.

To the left of the poma, Fire Cut and Drifter are two fast intermediate runs. Fire Cut often has small- to medium-size moguls carved into the hill and is slightly steeper than Drifter, which is often overlooked by other skiers. Barrelling down Fire Cut is a thrilling, if abbreviated, experience.

To the right of the poma are several runs through the trees, including Tomahawk and South Chutes. These runs are fairly steep, short chutes dotted with small glades that often contain untouched, dry powder. These quick but exciting alleys funnel into a rollicking, toboggan-like run with lots of twists, turns, jumps and trees.

While short in length, these runs offer lots of bang for the buck. Especially on a windy, stormy winter day, these runs off the poma provide a reprieve from long, frozen chairlift rides.

Few poma lifts remain in Colorado, as the quad chair craze of the last 20 years have all but put these dinosaurs to rest. 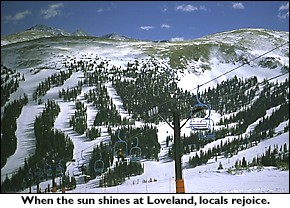 A poma is a surface lift, which means skiers are pulled up the hill with their skis on the ground. The poma consists of metal poles attached to disks. Skiers grab the poles and position the disk between their legs and sit back gently as they are pulled up the hill. Both Copper Mountain and Breckenridge have poma lifts/ T-bars taking skiers to the upper reaches of their areas.

The poma adds to Loveland’s appeal as a back-to-basics place to ski, friendly and welcoming in its own way. But perhaps more importantly, the poma can help salvage a day when conditions force most skiers into the lodge.

Regular lift ticket prices are $42, but we presented our “Copper Card” (a Copper Mountain discount card available to Front Range skiers before the season begins) and were given $10 off.
Story and photos by David Iler