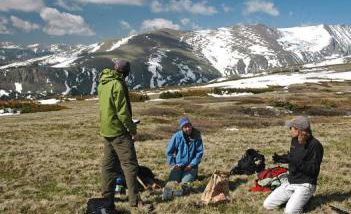 Ecosystems dependent on seasonal snow and ice are most sensitive to climate change and Colorado is impacted, according to papers published in the journal BioScience about ecological changes at Long-Term Ecological Research sites, including CU-Boulder’s Niwot Ridge.

The site west of Boulder includes several thousand acres of subalpine forest, tundra, talus slopes, glacial lakes and wetlands and reaches an elevation of over 13,000 feet on the Continental Divide.

Temperature and precipitation logs from two stations at Niwot Ridge, one at 12,700 feet in elevation and a second at 10,000 feet, tell the story. The climate at the higher meteorological station is slightly wetter and cooler than in recent decades, while the station at 10,000 feet sits in a subalpine forest (less than five miles away and visible from the higher station) and is getting significantly warmer and drier.

CU-Boulder Professor Mark Williams is the principal investigator on CU’s Niwot Ridge LTER site and co-author of “Long-Term Studies Detect Effects of Disappearing Ice and Snow,” one of the six papers in the BioScience series.

Niwot Ridge is the highest long-term climate station in the U.S. and climate records go back more than 60 years.

Williams said warming at 10,000 feet and lower may be causing enhanced surface water evaporation and transport that moves westward and higher in the mountains, with water vapor converting to snow that falls on the Continental Divide.

Snow cover increases reflectivity of incoming sunlight, further cooling the alpine area and countering the overall warming trend in the West. (Temperatures are believed to have risen 2-3 degrees F over the past decade due to more greenhouse gases.)

With snowpack roughly half of normal in 2012, high country snow this year began to melt more than three months earlier than 2011.

American pikas, found on alpine talus slopes, need heavy snowpack to insulate them from cold winters and are impacted by a changing climate. In lower, isolated mountain ranges in Nevada, researchers are seeing a marked decline in American pika populations.

LTER study authors predict that microbes, plants and animals that depend on snow and ice will decrease if they are unable to move into areas of snow and ice at higher elevations. At the same time, less snow could cause deer and elk to move higher in altitude to browse.

Trees have been walloped by climate change and may not dominate future mountain landscapes. “Trees in Colorado’s mountains are under a tremendous amount of stress due to drought and pine beetle outbreaks,” said Williams. ” … As we lose trees to drought, beetles and wildfires, we are likely to see an invasion of grasses and shrubs in areas where we have never seen them, causing a complete restructuring of our forest community.”

As the snowline moves to higher elevations due to warming temperatures, so will parts of alpine tundra.

” … it will be awhile before warming climate change pushes the tundra off the tops of mountains,” said Williams. “But that is the direction we are heading.”