It’s a clear but typically windy Sunday afternoon in Pacific Grove, Calif. A 2 p.m. low tide has pulled back the Pacific Ocean, in which thousands of backbone-deficient critters cling for their lives to the slippery rocks. 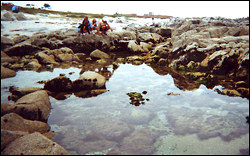 Peering through his binoculars, John Ewald, a game warden with California Department of Fish and Game, spies two figures, three parking lots down, plucking something from between the rocks and placing that something into a bright blue plastic bag. To confirm his suspicions, Ewald takes a closer look thorough his telescope. Aha! Just as he thought. The pair are stripping black turban snails from their rocky, watery homes.

Stealthily, Ewald moves his truck to the turnout and parks behind another truck as to not be seen. He watches for a few more minutes, then heads down to the beach to confront the takers. By the time Ewald approaches the poaching pair, they had returned to their group of eight others, who are setting up a picnic on the rocky beach. As the imposing Ewald approaches, one of the group slips the blue plastic bag behind the barbecue.

Ewald identifies himself as a state game warden. Here, in the Pacific Grove Marine Gardens Fish Refuge, he explains to the group, taking animals out of the tide pools is against California Fish and Game code. “You are not the police,” charges one of the group, who identifies himself as a college professor. “Oh yes I am,” Ewald assures him. He asks for the plastic bag; inside of it rests 81 black turban snails, perhaps intended to accompany lunch. In some cultures, the boiled snails are considered a tasty treat.

“They didn’t know it was against the law,” insists the professor, but Ewald doesn’t buy it. After a lecture, he issues one of the takers a citation and returns the snails to the water.

This scenario is not unusual, Ewald says. He sees people stripping critters from the Point Pinos tide pools all the time. Point Pinos is a craggy mass of rock jutting out into the frigid Monterey Bay.

Point Pinos, also known as the Great Tide Pool, is one of the richest tide pool habitats in the world. It was from these tide pools that the famous Doc Ricketts of John Steinbeck fame fed his formaldehyde-filled jars in the early days of marine science.

Under-supervised school groups visiting the tide pools can sometimes digress into a crew of inadvertent poachers.

This quarter-mile stretch of treacherous, rugged shoreline isn’t the kind of beach that beckons sunbathers and beach ball games. But people flock to this rocky coast by the hoards — nearly 40,000 a year, especially at low tide, when the sea recedes, exposing hundreds of micro-cosmic tide pools all along Point Pinos. They come to see the life teeming within these puddles, an array of marvelous, invertebrate creatures, including sea stars, anemones, black turban snails, hermit crabs, chitons and limpids.

But lately, a perceived degradation of tide pool life has some locals concerned that tourists are taking a toll here. A group of conservationists calling themselves the Coalition to Preserve and Restore the Point Pinos Tide Pools are calling for stricter control over the taking of life from the tide pools. While none of these critters are endangered and it’s already illegal to take here, the coalition wants to see stronger enforcement and a crackdown on scientific collection permits.