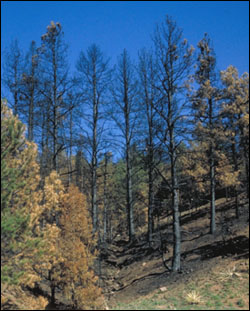 A forest fire in a Jefferson County Open Space park in Colorado left many scorched trees.

Expedited logging after forest fires may harm forests, according to nearly 170 scientists responding to efforts in the U.S. Congress to pass the Forest Emergency Recovery and Research Act. The issue of salvage logging was highlighted by a forum in Washington, D.C. this month, during which the impacts of logging in a forest following fires or other natural events were discussed, including the role these events play in maintaining wildlife and “healthy” forests.

The scientists sent a letter to Congress expressing their concerns about speeding up logging and replanting activities after forest fires and natural disturbances. Logging and replanting, they argued, “may actually slow the natural recovery of forests and of streams and creatures within them.”

According to American Lands Alliance, nearly 190 million acres of federal land are at high risk for wildfire. Following the devastating forest fires in the summer of 2002, Congress passed the controversial 2003 Healthy Forests Restoration Act. The current legislation seeks to address rehabilitation after natural disasters.

Arguments against logging in forests after fires include:

“By adding another stressor to burned watersheds, post-fire salvage logging worsens degraded aquatic conditions accumulated from a century of human activity,” said Karr, an aquatic and avian ecologist at University of Washington. “This additional damage impedes the recovery and restoration of aquatic systems, lowers water quality, shrinks the distribution and abundance of native aquatic species, and compromises the flow of economic benefits to human communities that depend on aquatic resources.”

The scientists also expressed economic concerns of postfire logging. According to a report cited in the letter, The facts and myths of post-fire management: a case study of the Biscuit fire, southwest Oregon (D.A. DellaSala, et. al, 2006), costs of postfire logging operations after the 2002 Biscuit fire in Oregon exceeded revenue by $14 million. Fifty-three million board feet of timber was removed.