Washington state’s Puget Sound is the focus of a large-scale estuarine restoration project, spearheaded by conversation organizations hoping to amass a multi-billion dollar warchest. People For Puget Sound, The Trust for Public Land and The Nature Conservancy formed the Alliance for Puget Sound Shorelines, chartered with restoring and protecting hundreds of miles of ecologically rich shoreline. 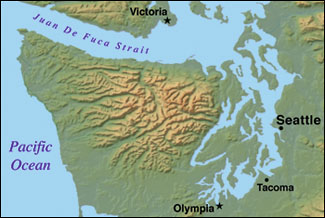 The group hopes to create 10 new parks and natural areas over the next three years.

According to TPL, Puget Sound’s shorelines have been in decline for years, with thousands of acres contaminated by toxins, 75 percent of salt marsh habitat destroyed and one-third of the shoreline altered or engineered from its natural state. Less than 10 percent of the shoreline is open to the public, said the group.

Of the Puget Sound’s 18 threatened or endangered species, nine rely directly on shoreline habitat, said TPL. The region’s orca whales, declared endangered last month, are also connected to shorelines, as the shorelines are the basis for a food web that feeds salmon and, ultimately, orcas.

The region’s economy, TPL pointed out, is also affected by the Puget Sound’s decline. Since 1980, nearly 30,000 acres of commercial shellfish beds have been closed due to contamination. Hood Canal’s low-oxygen levels resulted in a die-off of tens of thousands fish in 2004, said the group.

Fueling the restoration effort is a $3 million grant from the Russell Family Foundation. The alliance plans to use the grant as a base to raise $80 million over the next three years and create a multi-billion dollar campaign over the next 10 years.

The alliance said it is ready to begin identifying “high conservation value” shoreline sites that can be restored, purchased or protected.

Puget Sound is a semi-enclosed glacial fjord, or estuary, where Pacific Ocean salt water mixes with fresh water draining from the surrounding watersheds, according to the Puget Sound Action Team, an entity formed by the Washington state legislature to implement the state’s environmental agenda for Puget Sound. (The PSAT provides a detailed description of Puget Sound on its Web site; a very shortened and edited version appears below.)

Puget Sound contains a series of underwater valleys and ridges, with an average depth of 450 feet. The deepest point is 930 feet just north of Seattle. Separating the waters of the Straight of Juan de Fuca and Puget Sound is a shallow sill at Admirality Inlet.

South of the inlet, Puget Sound consists of four interconnected basins. The largest and deepest, Main Basin, consists of two sub-basins and extends 60 miles from Admiralty Inlet to the Tacoma Narrows. Around the Tacoma Narrows, a shallow sill separates the Main Basin from the Southern Basin. To the north and east of the Main Basin (not separated by a sill) is the Whidbey Basin. This basin is to the east of Whidbey Island and includes the waters of Possession Sound, Port Susan, Saratoga Passage and Skagit Bay.

The smallest of the four basins is the Hood Canal Basin on the western side of Puget Sound. This long, narrow channel branches from the Main Basin south of Admiralty Inlet and extends about 80 miles south, between the Olympic Mountains and the Kitsap Peninsula.

The Puget Sound shoreline is comprised of beaches, bluffs, wetlands, deltas and mudflats. The PSAT notes that three Puget Sound salmon species are in danger of becoming extinct. Resident orca whale population declined from 97 in 1996 to 82 in 2003.

According to the group’s 2005-2007 Puget Sound Conservation & Recovery Plan, top priorities include: