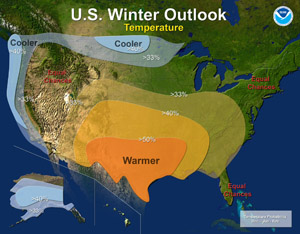 The northern Rockies may be the beneficiaries of an active La Niña this winter if forecasts gleaned from the annual 2010-2011 Winter Weather Outlook from the National Oceanic and Atmospheric Administration (NOAA) are correct.

While the outlook specifies larger regions, a close look at the maps provided by NOAA reveals some clues about where abundant snow may fall in Wyoming, Utah, Colorado and New Mexico from December through February.

The dominant climate factor, La Niña, often brings lower-than-normal temperatures and increased snow in the Pacific Northwest and western Montana. The Pacific Northwest is likely to experience a colder and wetter-than-average weather through February 2011, according to NOAA’s Climate Prediction Center.

Based on the NOAA forecasts, we think the Pacific Northwest, northern Utah and the northern Rockies could be where the snow flies.

All is not lost for other regions in the West hoping for snowfall, however, as the forecasts are only through February, leaving out snowy March and April. 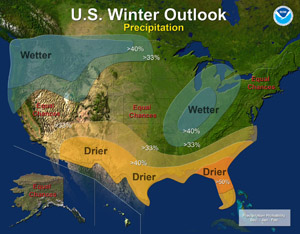 NOAA’s seasonal outlook does not project where and when snowstorms may occur, or total seasonal snowfall accumulations.

NOAA reminded that last winter’s El Niño contributed to record-breaking rain and snowfall, leading to severe flooding in some parts of the country and record heat and drought elsewhere.

La Niña has the potential to bring weather extremes to parts of the nation.