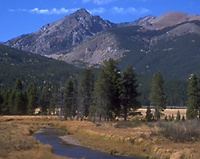 Across the Kawuneeche Valley

With over three million visitors per year, Rocky Mountain National Park precariously balances 265,000 acres of spectacular alpine beauty with unrelenting crowds of humans. Once summer fades into autumn, frosty mornings, bugling elk and golden aspen are harbingers of the coming winter. The human crowds remain, but solitude may be found off the beaten path of the park — U.S. 34.

Driving through Grand Lake and into the park, the green Kawuneeche Valley and the Never Summer Mountains dramatically form the western boundary. This is the “wet, west side” of the park, and its beauty is a bit more subtle. With more rain and snow than the eastern side, the west side is home to lush forests, wide valleys and swollen streams.

Several hiking trails traverse the Kawuneeche Valley and lead into the upper reaches of the Never Summer Mountains and beyond.

The Timber Creek campground is the west side’s lone developed campground with about 100 very close sites. Even well into September, it was jumping with car traffic until well after 8 p.m. 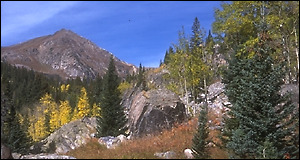 Behind the campground is shallow, slow-moving Timber Creek. Its banks offer a good spot to watch the sunset and moonrise. Ever-present during September and into October is the strange, almost mournful cry of male elks – a cross between a rusty farm gate swinging in the wind and the high whinny of a horse. Elk are less abundant on the west side of the park, but the mating cries of the males is still a frequent sound in late September.

Aspens are difficult to catch showing off their fall colors, as they turn brilliant gold for only a few days before falling. 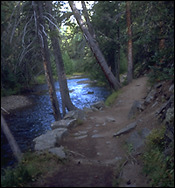 Although the mighty Colorado River traverses 1,450 miles through Colorado, Utah and Arizona before spilling into the Gulf of California, it starts rather modestly as a clear, swift-running stream in the north end of the Kawuneeche Valley.

A sign at the beginning of the Colorado River Trail indicates the wealth of hiking terrain to be found here:

We decided to head to Lulu City.

The trail begins by climbing quickly through thick forest. For the first mile-and-a-half to two miles, the trail hugs U.S. 34, and vehicle traffic disturbs an otherwise peaceful scene. Thereafter, however, noise fades and the trail continues its course into the far northwestern reaches of the park. Several streams and creeks along the trail spill into the Colorado, and the sound of rushing water never seems to be far for most of the journey to Lulu City.

About 2.5 miles into the trail, we spotted about 100 yards off to the west, in a narrow section of the valley, a mama moose and calf casually feeding in a shallow stream. These extremely reclusive, lumbering creatures are not often found on such a heavily traveled trail, but the two seemed content to gorge on vegetation while glancing up every now and then at the small group of humans that gathered on the trail to scope them out.

Perhaps it was the seasonal change, when other denizens of the park shed their shyness, that brought the two moose out into view. 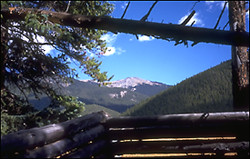 The view across Big Meadows.

After hugging the Colorado River, the trail climbs a bit sharper as it crosses Crater Creek, eventually reaching the site of Lulu City, a once bustling mining town, now a deserted part of the upper valley with only a few skeletal remains of log cabins left. Lulu City offers several good places to sit and rest and enjoy a lunch along the river. North of Lulu City, the trail continues on and splits off east along the Little Yellowstone and west into Skeleton Gulch and Box Canyon — enticing destinations for the hardy backpacker.

Returning to the trailhead, we encountered a small group of female elk leisurely lunching on grasses. The large animals seemed nearly oblivious to humans, presumably with other things, such as bugling males, on their minds.