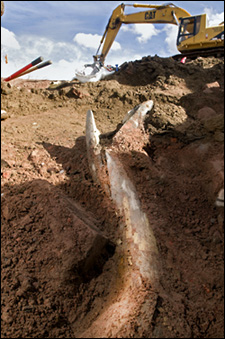 A chance discovery in October of Ice Age fossils at Ziegler Reservoir in Snowmass Village, Colorado is providing scientists with a vegetative and climate history spanning more than 100,000 years, according the the U.S. Geological Survey (USGS).

The Snowmass site, considered to be one of the most significant Ice Age sites discovered in Colorado, contains the fossils of Columbian mammoths, mastodons, bison and deer.

Initial radiocarbon dating indicates that the site is more than 43,500 years old and geologists estimate the site could be as old as 130,000 years, said the Denver Museum of Nature & Science (DMNS).

A USGS team is studying about 22 feet of fossil-bearing sediments from the megafauna site. According to the scientists, changes in color, grain size and organic matter content in the sediments likely reflect significant changes in climate and vegetation in the area.

Sediments that contain the fossils appear to have been deposited in a small lake or marsh that formed when a stream was dammed by a glacial moraine (an accumulation of glacier debris) at least 130,000 years ago.

The team is using pollen analyses and carbon-14 dating techniques to determine the age of the fossils, the environment in which the creatures lived and vegetation changes in the area during the time spanned by the lake sediments. Small invertebrate fossils found in the sediments will be studied to figure out the water temperature and chemistry of the lake at various points in time. 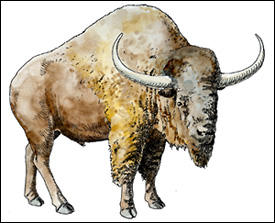 “A vegetation and climate record that covers this much time at such a high altitude – about 8,800 feet – is unprecedented in Colorado to our knowledge,” said Jeff Pigati, a USGS geologist.

A high-altitude setting is consistently underrepresented in the known Ice Age fossil record, according to DMNS.

“There have been suggestions that high-altitude environments might have harbored different communities, or had a different story of change, but since fossils representing them are so rarely found, no one has known for sure,” said Dr. Daniel Fisher, a mastodon expert from the University of Michigan, and a scientific consultant on the excavation.

Construction crews working on the expansion of Ziegler Reservoir made the original discovery of a juvenile Columbian mammoth on Oct. 14.

At least one of the tusks recovered from the site is still white after tens of thousands of years. Scientists may recover well-preserved ancient DNA from some of the fossils, said DMNS.