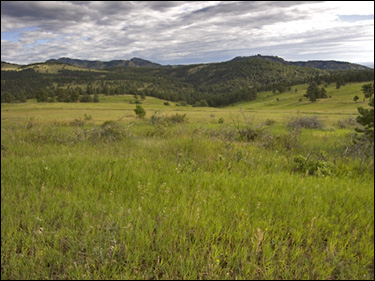 A meadow at the Rawhide trailhead.
August 2010

There are a string of open space parks west of Golden along Golden Gate Canyon Rd., including White Ranch Open Space Park.

At the northwestern edge of the park is a small circuit of trails cutting through the low, green hills and forests of this area. The Rawhide trail traces the outer circle of these trails and covers about 4.8 miles.

The area sits at approximately 6,800 feet and represents the easy and scenic foothills topography found up and down the Front Range.

On this early Sunday morning, a refreshing, cool breeze blew in across the valley, bringing with it scents of pine and sage. High above Golden to east, White Ranch overlooks the eastern plains, North Table Mountain and other landmarks below. 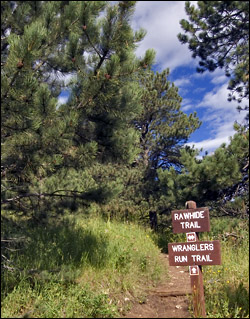 The loop begins as a single-track trail on windy ridgeline, leading into a lush, small pine forest with sage, ferns and scrub oak growing on the damp ground beneath the larger pines.

A cool corridor through a foothills island high above the plains.

The trail wound its way moving north counterclockwise, going up and down gently, some areas a little more dry than others. Over the ridgeline, the plains and North Table Mountain peeked through the pines, offering interesting views of west suburban Denver.

Moving around northwesterly, a succession of forests and meadows meshed into one another. 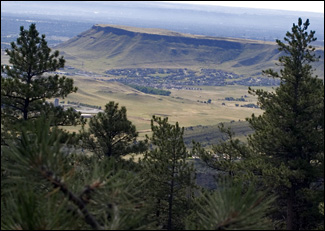 A glimpse of North Table Mountain through the trees along the Rawhide trail.
August 2010

Curving around south, the trail led to a large hillside, through a small burned area,

Rolling and rolling, the trail produced a quiet, hypnotic cadence.

The trail is well-marked and all the intersections with Wrangler’s Run and Waterhole trail and clearly marked.

On the last quarter of the counterclockwise circle, the trail widened and became a bit more crowded with hikers.

Overall, the trail was rather sparsely used for a weekend morning, with about a half-dozen hikers, a few equestrians and three mountain bikers encountered along the way.