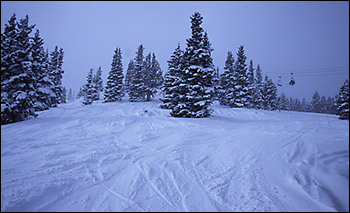 The 2001-2002 ski season started off with little snow as most Colorado ski areas barely accumulated bases between 35 and 40 inches by the end of January. Yes, it takes a lot to get a charge out of a Colorado skier, spoiled with soft Rocky Mountain powder. Yet on the practical side, the price of a lift ticket justifies wisely choosing the right ski area at the right time (preferable during or immediately after storm), to get the most for one’s money.

As has been the case for the last few years, Winter Park and Steamboat Springs have been the locations in Colorado where Old Man Winter has been most kind to. Consequently, when the ski jones kicked in mid-January, we pointed our truck to Berthoud Pass and Winter Park, where a few inches of fresh snow had fallen the night before.

An hour and a half from downtown Denver, via I-70 and U.S. 40, is the turn-off to Mary Jane, the other side of the mountain from Winter Park (although officially part of the Winter Park resort complex). A series of parking lots line the road to the “base” of Mary Jane, which is modest in size compared to the sprawling Winter Park base. Parking at the base of Challenger lift is very convenient and (for now) free. We prefer the Mary Jane side of the hill for its relatively smaller crowds and intermediate to advanced terrain. The ski experience at Mary Jane is a little more intimate and wild than on the Winter Park side.

Since we didn’t buy into Winter Park’s pre-season pass programs (after splurging in a moment of weakness for several other programs), we opted to buy a lift ticket in Denver at the local King Soopers supermarket for $43. Regular price all-day adult tickets this season at Winter Park are $56, two-day passes are $92; three-day tickets are $135; half-day tickets are $37.

Mary Jane is served by four lifts — one quad (Summit Express) and three double chairs (Challenger, Pony Express and Iron Horse). The quad leads to great terrain, including Sleeper, one of Colorado’s classic blue/black cruiser runs. However, the quad can be crowded and can dump a lot of people on the hill, so we sometimes sneak over to Mary Jane’s other lifts.

This January day started out snowing, cold and wintry — gradually becoming more windy and cold, necessitating goggles, then ski mask, and finally, refuge at The Club Car bar. It was a day that called for an alternate strategy — minimizing lift time while carving enough runs early to beat becoming an icicle. 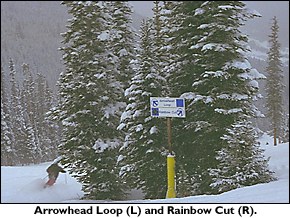 Big clumps of powder fell off spruce trees as snow fell during mid-morning. The wind started to kick up and we decided to start the day at the Pony Express lift, which takes skiers to the top of two excellent runs — Rainbow Cut and Lower Arrowhead Loop. Rainbow Cut turns a little gnarly at the bottom with a nice-sized mogul field ending the run.

Both runs are short blue/blue-black cruisers that remain uncrowded. On this day, Arrowhead Loop was blessed with about four inches of soft, light powder.

Lines at the Summit Express quad fluctuated throughout the day, and when a quick move through the line was assured, we jumped at the chance. At the top of the lift, several excellent glade trails, Side Track, Sluice Box and Pine Cliffs funnel into Sleeper. Decent stretches of powder remained on these short but excellent tree runs.

Despite the generally excellent conditions, it was still apparent that even in January, early-season conditions prevailed. Poles marked thin and rock-exposed areas, particularly on black runs such as Riflesight Notch. The double Iron Horse lift, which rises to the top of the excellent blue/black Mary Jane run (in addition to great powder through the trees under the lift) was closed.

Some days, Old Man Winter rules, as he did on this day, forcing an abbreviated ski day. However, Mary Jane has become the ole’ reliable in terms of decent snow coverage and the likelihood of powder.

We’ll be back to further sample the rest of Mary Jane, Parsenn Bowl and the little nooks and crannies on the Winter Park side.

Like most Colorado ski areas, Winter Park is under pressure to develop more and compete with Vail Resorts and other well-heeled (or heavily leveraged, depending on your point of view) mega-resorts. We hope the drive to compete doesn’t compromise the charm and accessibility of Mary Jane.
Story and photos by David Iler