Notes from a cosmic gumshoe — Dateline: The San Luis Valley

A busy day in the valley

Three workers at a construction site, out in the Baca Grants, see “six fighters cookin’ down the valley (north to south).” Then, three peeled off formation and headed directly south “toward Greenie (Mountain).” The other three continued down the “VR” around Blanca Peak. Twenty minutes later a “huge cargo plane” flew low over the Sangre de Cristo Mountains from south to north. Later, a small plane was seen flying low over the northeast corner of Baca Ranch. The workers thought it may have landed between Dead Man’s and Sand Creeks.

7:45-8 p.m., central San Luis Valley
A bright orange light hanging over the center of the valley is observed by myself and my brother Brendan. According to another witness, writer/historian Pat Richmond, it had a cigar-shape and did not appear to be moving. Richmond claims she has been seeing the “same orange light,” off and on, all summer.

8 p.m., Baca Grande Chalets
A fourth witness in the Baca looked up and saw an “egg-shaped” sphere that instantly shot over the mountains. The witness had the distinct impression that the object reacted to her “seeing it.” One has to wonder if folks are simply witnessing REAL extra-mundane phenomena, or indulging their wishful thinking. I can’t help but think they are seeing something unusual. There were no known reports to the sheriff’s office of these possible early fall overflights of the valley.

It’s very tempting to jump to conclusions concerning these “orange lights” hanging over the SLV. They are so common, I’d bet we miss a lot of them. They blend into the sky so effortlessly.

They were jumping around!

Tuesday, Oct, 26, 1996, 7:30-8:45 p.m.
At Road 66T and Road T, myself, Rocky Mountain News reporter Alan Dumas, and News photographer Steve Nickerson were skywatching just inside the Baca Ranch when we observed a solid, unblinking orange light appear fairly low in the southeast, heading northwest. The object was traveling approximately 200 miles per hour. The craft did a loop and headed back toward the east displaying standard FAA lighting.

Several minutes later, two craft, in formation, came over the Sangre De Cristos from the east, headed west. One craft did a loop, and headed back to the east. The other hovered for several minutes over the Great Sand Dunes. Several minutes later, we observed a formation of seven to nine lights flying over the La Jara Reservoir area. Then, a bright orange light appeared out of the west, headed east. Craft was unblinking. It headed east, turned and headed south. Then it turned again and started heading north. It turned, again, and headed back east. It did this zig-zag, box-type maneuver several times. When it was finished, it seemed to greatly increase its speed and disappeared directly south. 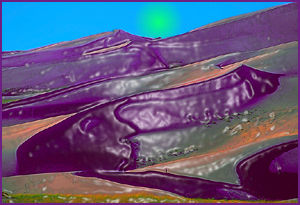 I really love it when visiting journalists gets to witness, first-hand, some of our perplexing aerial phenomena! I made a point of describing to the two of the what “they were most likely to see.” I practically described their subsequent sighting scenario! Even though they were jumping around like little kids, Alan wrote in his Spotlight article a cool, third-person, dispassionate version of their “unbelievable” experience.

6:30 p.m. Crestone
Two witnesses see a bright object, larger than a satellite, head over the mountains from the east. The object appeared to “shoot” across to the west at a high rate of speed. Witnesses said object could not have been a shooting star because it went from a slow speed to an extremely fast speed. Witnesses gauged speed by comparing to conventional aerial traffic which appeared “much slower.”

They’re back in Eagle County

Saturday, Nov. 2, 1996 Burns, Colorado
Susan Nottingham, (referred to me by Todd Ingles of the Colorado State Livestock Board) discovered an 1,800 pound, six year-old, black-angus seed-bull laying on it’s right side, “mutilated,” in a 60-acre pasture on a snow-covered portion of the Nottingham ranch near Burns. The professional (15 years) cattle-rancher noted that the animal’s genitalia, rear-end, eye, ear, and left-side of its muzzle had “obviously been sliced off.” No obvious cause of death apparent. A line of three 2-inch abrasions were noted on the belly in front of the penile incision. A report was made to Eagle County sheriff A. J. Johnson, who along with sheriff’s deputy James Van Beck and a local veterinarian, investigated the case. There were no signs of a struggle and no additional clues around the animal that lay in a “marshy section” of the pasture.

In between these formations, around the Hooper area, I saw a bright, unblinking orange light, five to six times the size of Mars headed west at a conventional rate of speed.

Tracks indicated that coyotes had circled the carcass 25 feet away. Scavenging birds showed an interest in the carcass but refused to land near the animal and no bird droppings were observed on or near the carcass. No unusual herd reactions were noted. Photographs and complete sets of forensic samples were obtained along with complete soil and flora samples. The rancher mentioned hearing a low-flying helicopter in the early morning “a few days before” the animal was discovered. No other reports of unusual activity in the area made to the Eagle County Sheriff.

Please don’t tell me THAT!

At the many talks and seminars where I’m invited to speak, invariably someone will ask, “Do human mutilations ever happen?” Until G.S. Schellhorn’s “investigation” of the infamous San Paulo, Brazil case, I would answer “I don’t know, I’ve never heard of a documented case.” Now I carry those hideously gross autopsy photos to satiate the curious and titillate the timid.

On Sept. 28, 1996, as fate would have it, I found myself at a book-signing at the Taos Crystal Center when I was casually introduced to an “ex-CIA scientist.” He is now a private sector consultant working on “electromagnetic and anti-gravitational propulsion systems.” He was very knowledgable about the so-called UFO phenomenon and asked several very pointed questions pertaining to more obscure cases from my mountains of San Luis Valley data. Then he dropped a bombshell.

“Did you hear about the human mutilation down near Silver City?”
“WHAT?! . . . You’re kidding?”
“No, I’m not. A friend of mine in the (New Mexico) State Patrol told me about it. They found a 16-year-old girl . . . just like the cows.”
“When did this supposedly happen?”
“About three, three and a half weeks ago. (Right when Taos area mutilations were being reported) They put the lid down real tight on it.”
He told me that these cases were not as rare as I might believe and that the authorities were extremely careful not to let word of a case of this kind out to the media.
“They made sure there is no record of the death,” he said.

The doctor is a very interesting man. We talked for quite a while about his thoughts pertaining to the UFO question. His eyes twinkled when he refused to answer any direct questions about our government’s flight capabilities, but he offered to talk with me at length in private. “You’ve got a place to stay next time your down here . . . we’ll talk. “

At the many talks and seminars where I’m invited to speak, invariably someone will ask, ‘Do human mutilations ever happen?’

Busy nights in the valley

Fri. Nov. 8, 1996, between 5:15-5:25 p.m.
A very busy night started with Crestone resident Marge Sanders and two friends out walking, and noticed a “line of lights” on the western horizon over the northwest side of the San Luis Valley. The “three white silver things” were strung out around 7 degrees above the La Garita area. After several minutes they moved to a vertical position, one on top of the other. After 10 minutes, the line of lights disappeared to the west and a fourth light appeared to the north, hovered for a minute, then it also disappeared.

7 p.m., Baca Grande Development
I was driving out into the Baca Grants to watch the Tyson/Holyfield fight when I noticed an unusual amount of conventional aerial traffic. I stopped in the driveway of the house where I was headed and watched two groups of two blinking lights headed east to west over the valley. Then I noticed four other lights in a similar formation further south toward Mount Blanca. In between these formations, around the Hooper area, I saw a bright, unblinking orange light, five to six times the size of Mars headed west at a conventional rate of speed. I alerted three other witnesses who joined me outside to watch the orange light disappear to the west.

9:30 p.m., Baca Grande Development
I went outside and again noticed an unusual amount of conventional aerial traffic. This time, four lights headed north up the range. Three lights over Poncha Pass were headed west, and again, four lights were headed over the valley to the west. Again, an orange light was observed headed west over the Hooper area. I again alerted everyone, and they came outside to take yet another look. The whole valley appeared ringed by these conventional lights.

11:10 p.m., Baca Grande Development
I was leaving the Grants when I observed what appeared to be extensive military overflights of the valley. This time the 13 lights (total) were not with an orange light.

Wednesday, Nov. 13, 1996, 6:28 p.m.
I received four calls, in quick succession, reporting a “huge ball of white light” that fell straight down to the ground for two to three seconds toward the southeast side of the valley. The object was described by witnesses as “larger than a full moon.” Each caller was positive the object came down in the valley. The fireball was seen from the extreme northern end of the valley to the Colorado-New Mexico border. One woman, south of Antonito, Colorado, claimed she was sure “it fell right next to” her car.

The Alamosa Sheriff received two calls, Saguache County received 4 calls, Custer County received a call, and the Colorado State Patrol received 2 calls. NORAD and Peterson AFB received “no calls.” Descriptions of the object at the northern end of the valley said it was whitish-blue, but as the various observer’s location headed to the south, descriptions were of a “rainbow color.” The woman witness on the border claimed she saw a faint trail behind it.
Christopher O’Brien
Sand dunes photo by Michael Lewis

In 1992, he began a private investigation of unusual documented events in the SLV which resulted in his book for St. Martin’s Press, The Mysterious Valley (September 1996). His investigation into the documented history of UFOs, unusual animal deaths, Native American legends, cryptozoology, secret military activity and the folklore in the world’s largest alpine valley has already captured world-wide interest.

Since 1993, he has written articles for Fate, UFO Universe, Leading Edge, Cyberwest, the Crestone Eagle and Phenomena. His investigation and research have been featured in the Denver Post, Pueblo Chieftain, New Mexican, Rocky Mountain News, Albuquerque Journal, Deseret News and Spirit Magazine. He’s appeared on hundreds of regional and national radio stations.

O’Brien has also helped develop, field-produce, supply footage and appeared in four segments of the syndicated Paramount television program Sightings, and appeared on Inside Edition, UFOAZ, KRDO News, KKTV Mid-Day. He was featured in the TBS documentary “UFO: The Investigators” (air date: Jan. 19, 1997). He is producing and directing segments of the nationally syndicated paranormal-news television program “Strange Universe,” and is a guest lecturer at Adams State College.

O’Brien is a fine-furniture maker and builds alternative homes out of straw bales and other renewable materials. He makes his home in Crestone, Colorado, where he is writing his next book, “Saucer Full of Secrets: Inside the Mysterious Valley.”