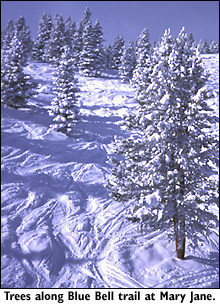 Long’s Peak, Mt. Evans and Pikes Peak are the three landmark 14,000-foot mountains that dominate the Colorado Front Range from north to south. These beacons of the Colorado high country are the bellwethers for snow conditions, absent more sophisticated gauges. If those peaks are white, it’s time to think about loading up some boards in the truck and heading off to the high country.

And for the first time in years, those beacons were tantalizingly white well before the 2002 winter solstice. The siren call of the slopes rang loudly in November 2002, thanks to El Niño and two annual events that stoke the ski and snowboard fires in Denver — the Colorado SnowSports Expo and the latest Warren Miller flick.

The expo is the place to gather as many lift ticket discount cards as possible, helping to ease the financial wallop skiing can exact. For the serious skier interested in savoring the stunning variety of Colorado ski terrain while avoiding bankruptcy, this event is a must.

Some of the deals I snapped up at the November 2002 event:

The Loveland Ski Area booth at the expo offered a discounted ticket and other prizes to those participating in a scratch-card contest.

Show up at a Colorado resort without a discount card, as I did at Steamboat on the first day of 2003, forcing me to cough up $64 for a full-price ticket, and you’ll quickly appreciate the difference these discounts make.

Other options for those unable to attend the expo are ticket discounts offered at Denver-area King Soopers, Safeway and Albertson’s grocery stores, entertainment discount books (such as Entertainment 2003), and deals offered by ski rental outfits such as Breeze Ski Rentals. (Each of these options offers different discounts to different resorts; call first to find the best deal.)

Another way to scam a cheap lift ticket is by buying a $20 ticket to see the latest Warren Miller flick. Warren Miller films are an annual rite of late autumn — in-your-face, high-voltage monster ski experiences that accelerate the heart rate of even the most jaded journalist or geographically challenged Denverite. More importantly, once you shake off the excessive hype, tickets for this season’s film were good for an early season Copper Mountain lift ticket.

With a full cache of cards carefully filed away, all that was needed was a little love from Mother Nature. She responded nicely. By Nov. 23, 2002, snow depths at most major Colorado ski resorts were near mid-season 2001-2002 levels. The promise of an El Niño-powered ski season was enough to awaken drought-stricken skiers from their powder dream reveries. After several less-than perfect ski seasons (at least according to my spoiled Colorado standards), the 2002/2003 season began on a high note.

Even in the depths of a mid-January pause in major storms sweeping the state, the season already yielded several powder days, highlighted by 16 inches of new powder at Steamboat on New Year’s Day, cushioning not only jump turns in the trees, but also the sticker shock at the ticket window.

The old wives’ tale that people don’t ski New Year’s Day because of nasty hangovers from the previous night was heartbreakingly disproved when at 8:15 a.m. I found Ski Time Square at Steamboat wall-to-wall with people and the line for the gondola stretching beyond the square itself.

However, once the gondola was cranked up and began carrying skiers up the hill, the line quickly dwindled in surprisingly fast fashion, negating plans to abort the square. And all was forgotten after finding my way to Sunshine and Priest Creek lifts, where acres of powder-laden glades provided an excellent way to ring in the New Year. 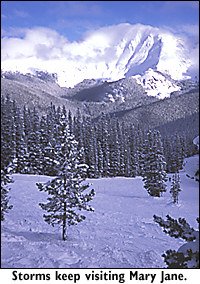 One of the aesthetic advantages to a snowy early season is enjoying the late autumn sun sitting low in the southern sky and casting dramatic high-altitude contrasts on the slopes. Nowhere is this more prevalent that at Loveland Ski Area, where the elevation rises 2,410 feet from a base of 10,600 feet. On a cold, windy November day, the snow at Loveland’s expansive Zip Basin upper bowls had developed a thin crust, sculpted by Continental Divide zephyrs into fantastic topographic shapes. Difficult to turn on, but beautiful to behold. As always, soft snow was to be found in the sprawling but well-spaced trees on the lower half of Zip Basin. Coverage, even in the trees, was excellent for November. Like other high-altitude areas, it’s not unusual to encounter three different types of snow on a single run at Loveland — wind-sculpted crust on top, soft powder in the glades, and hard pack near the bottom.

A brilliantly white half moon greeted us in the parking lot that morning, adding to the celestial grandeur of this Continental Divide treasure.

Fresh powder motherlodes Loveland and Mary Jane have been my refuge from poor snow years, and in good years they are hard to beat. In my visits to Steamboat and Vail this year, my first in several years, I was surprised at the number of ski instructors and students on the hill, something rarely seen in such numbers at Loveland or Mary Jane.

Mary Jane on December 13 was blessed with six inches of new snow on top of a few inches the previous day. Funky weather produced nearly spring skiing conditions, without the slush, as the humid breath of El Niño found its way into the Fraser Valley and enveloped Mary Jane’s runs in a cloudy fog. Tree runs off of Parsenn Bowl were spectacular. Later, on the Winter Park side, the sun broke out and bathed the slopes in a slanting, golden light.

With my Warren Miller ticket in hand, Copper Mountain on December 20 was home to a solid snow base in the high 30-inch range. Although no new snow had fallen for a few days, I was able to find soft powder in the trees along Bittersweet and between runs off the Timberline Express lift. While I wasn’t the only Warren Miller film beneficiary on the hill, the brimming parking lots did not translate into crowded slopes, thankfully. Copper’s long runs are its best attributes.

Entertainment at Copper was not restricted to the hill or nearby watering holes, but a creative, perhaps loony, bus driver, ferrying skiers from the village base to the outlying parking lots, delivered a bizarre monologue/confession over the bus intercom, perplexing and generally confounding passengers. Talk of “alien breeders” was a welcome addition to a fun day at Copper. Too often in these days of bland corporate resorts is an absence of whacky, “ski bum” misfits that used to define the ski lifestyle.

Vail for me is the Lake Powell of ski areas. The legendary terrain and expansiveness at Vail have come at a price to the mountain ecology, but it’s hard to stay away from the sterile, sprawling Eagle Valley for long. This year, it was peer pressure that swayed me. Vail Resorts has been successful in offering aggressively priced pre-season ticket packages for its stable of resorts — Vail, Breckenridge, Keystone, Beaver Creek and (through a “marketing agreement”) Arapahoe Basin, and many Colorado Front Range skiers have taken the bait.

My long absence from Vail came at a price, however. Not knowing the mountain made navigation a little tricky. Traversing to and from the famous Back Bowls from Lionshead is time-consuming, and under some time pressure to meet a compatriot, I aborted my first attempt to sample the backside of Vail. However, with 6 inches of new snow on a 37-inch base, I was able to make many turns in powder along lift 17. Upon the second attempt to reach the Back Bowls, a nasty storm moved in and squelched our plans. Tiny icicle missiles pulverized skiers at Vail that day in a storm more characteristic of wind-drenched Loveland. The weather was a grim reminder that good goggles and a warm face-mask are necessary accoutrements.

Strangely, in the midst of a vicious whiteout, the clouds briefly broke and uncloaked two military helicopters inexplicably flying low through a narrow opening in the nearby hillsides. Was Dick Cheney following me again?

Despite its strong allure to skiers, Vail routinely scores low in the environmental analysis conducted by the Ski Area Citizen’s Coalition. In the group’s 2002/2003 Ski Area Environmental Scorecard, Vail and sister resort Breckenridge both scored an “F.” Vail, together with Copper Mountain owner Intrawest, have led the charge transforming skiing into a loss leader for expensive real estate, leveraging public lands for invasive development.

Maybe I’ll skip another trip to Vail this year.

An eye toward spring

With snow bases hovering in near the 40-inch levels at most major Colorado resorts as of early February, conditions are ripe for an excellent spring season, as March and April are typically the snowiest months in Colorado.
Story and photos by David Iler