Nature provided an early holiday gift to Colorado ski areas the first week of December when a massive storm sat over the state for a few days, blanketing the Rocky Mountains with several feet of snow. One of the beneficiaries of the welcome winter weather was Crested Butte, in the central Colorado mountains north of Gunnison.

Great conditions in low season before the holidays was reason enough to make the four-hour drive from Denver.

Crested Butte’s steep signature peak is a Colorado icon and reflects the “extreme” terrain found within the ski area’s boundaries. Far from the well-traveled I-70 corridor, Crested Butte cultivates a mixed vibe, a blend of wealthy out-of-state touristas (fueling a real estate boom) and rough-hewn, adventure-seeking locals. More telemark skiers on the hill than snowboarders contributed to the relatively untamed atmosphere. Although Crested Butte was discovered long ago and is far from a secret, its relative remoteness keeps the crowds at bay. But with tens of millions of dollars earmarked for resort “improvements,” it’s hard not to slap an “endangered” label on Crested Butte. With large construction cranes looming over the base and talk of turning snowcats into backhoes during the off-season, it seems inevitable this cool area will be sacrificed at the altar of ROI.

Yet one thing that technology or marketing can’t alter is the weather. An inescapable characteristic of Crested Butte and neighboring Gunnison not found in resort brochures is the serious chill in the air — it was below -30 F the day before I arrived (that’s minus 30 degrees below zero). Locals were comparing patches of frostbit noses and cheeks. Fortunately, the temperatures during my stay ranged from 0 to a balmy 20. Gunnison/Crested Butte often takes honors as the nation’s coldest location on any given day of the year, earning it the title of the nation’s icebox. Even paradise can exact a harsh price.

Although I arrived a few days after the early December storm, nice patches of untouched snow remained on the hills of Crested Butte and blue sky days reigned on Saturday and Sunday, Dec. 10-11. Most of the mountain was open, save a cluster of the steep double-blacks accessed via the North Face lift. 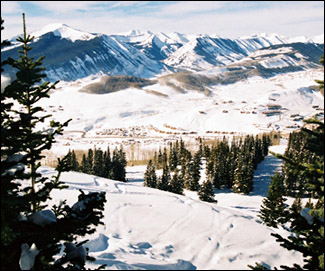 Surprising locals, the double-black Headwall was open early in the season owing to the generous snow depth, 42 inches. I managed to escape testing my double-black-diamond mettle by heeding the advice of a local to not venture up to the top without a local escort because of the possibility of ending up on a steep cliff-face with no escape route. OK, call me a wimp, but I rationalized my way out of it without too much guilt because there was plenty of cool terrain to explore elsewhere on the mountain.

A big reason why the snow was so good was that there were so few people on the hill. Few people meant no lift lines and fewer tracks through the lingering powder. Four days and more after the storm, the snow was great.

While Crested Butte’s calling card is its wealth of extreme terrain (the most lift-served extreme terrain in North America, according to the resort), the ski area also has plenty of intermediate and expert (single black diamond) terrain. The official breakdown is 121 total runs — 23 percent beginner, 57 percent intermediate and 20 percent advanced, covering 1,125 acres.

More extreme terrain serves as a form of “consciousness-raising,” if you will. Officially, according to information on the trail map, so-called “extreme terrain” is defined by the Ski Safety Act as “… cliffs with a minimum 20 foot rise over a 15 foot run and slopes with a minimum 50° average pitch over 100 foot run.” Scary enough. But beyond scaring yourself to death, the prevalence of lots of double-black terrain means (as a local pointed out) that there’s always another level of terrain to aspire to — another level of skiing ability to reach. That’s pretty compelling for a skier stuck in terminal advanced-intermediate mode.

More often than not during my stay, I gravitated toward the East River lift where well-covered runs Resurrection, Double-Top Glades and Black Eagle were in mid-season form with great snow. The nicely spaced trees of upper Double-Top are scenic preludes to a steeper and more challenging second half of the run. After half a dozen descents, Double Top Glades quickly earned its place on my list of favorite Colorado ski runs.

The long and steady Resurrection offered mid-size moguls on a mildly steep pitch, perfect for an early season workout.

Evidence of Crested Butte’s grooming machines hard at work the previous night was present on many runs, including several black runs under the Silver Queen Express Lift, with Twister being a notable exception. Resort literature boasts that every beginner and intermediate run is groomed every night — bad news for skiers who enjoy the small to mid-size moguls that naturally form on intermediate runs. However, on the intermediate Black Eagle, a narrow corridor of ungroomed terrain was left unscathed.

Both the ski hill and the town were deserted during my visit. I speculate that because Crested Butte is essentially a “destination” resort, most visitors book during mid-season or in March when they’re virtually assured of a good snow base. So when good early season conditions bless the area, no one’s around.

In a way, Crested Butte may be the perfect bookends for a Colorado ski season. Hit it early before the crowds show and up hit it late, when the North Face extreme terrain is open and better-conditioned ski legs can answer the challenge.
Story and photos by David Iler