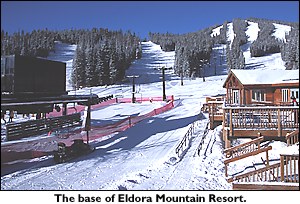 In mid-February, in this season of generally poor snow conditions, a day dawned with that rare mix of conditions: sunny, blue sky and 6 inches of new snow. These were the (reported) conditions at Eldora Mountain Resort, an often-overlooked ski area west of Boulder, Colo.

With 680 skiable acres, Eldora lacks the size and variety of other Rocky Mountain ski areas, but its low-key charm and location offer a satisfying alternative. Winter and spring snow storms that miss the central mountains of Colorado often find their way to Eldora, making this area a little-known secret for Front Range powder hounds.

The laid-back atmosphere at Eldora reflects its proximity to Boulder and Nederland, two of Colorado’s funkier towns. Many telemark skiers, students and free spirits roam the runs of Eldora. The drive up Boulder Canyon (Colo. 119) from Boulder to Eldora can be a little treacherous during or following a storm, which may keep the masses away. The ski area is about an hour and 15 minutes from central Denver, depending on conditions.

Eldora sits at 9,200 feet, rising to 10,600 feet at the summit, where great views can be enjoyed, both to the west to the Continental Divide and to the east, past the foothills of the Colorado Front Range and beyond to the Great Plains.

Parking at Eldora is, for now, free, and visitors can simply park and walk to the base lifts, an increasingly diminishing experience in Colorado.

From the base, the Challenge lift is Eldora’s gateway to the area’s prime areas, served by the Indian Peaks and Corona lift. Unfortunately, despite this being a powder day, Eldora’s snow cats had been busy grooming several runs on the mountain — both intermediate and expert trails. However, with a less-than-stellar snow year in Colorado, grooming tends to preserve runs longer into the season, a necessary trade-off when snow is thin.

On this day, the race was on as the lifts started running to catch powder runs on the Corona trail under the Corona lift. This relatively long, fast run, designated a black or expert run, but more like a blue/black run in terms of difficulty (as are most of Eldora’s “black” runs), held its powder for about an hour and a half, providing several great forays through what this year has been elusive Rocky Mountain powder. Corona has a perfect pitch for cruising and the soft, easily navigated powder made it a treat. Under the powder, the base was hard and snow-packed, although the crustiness softened up a bit as the morning wore on. After several attempts this season to catch a good powder day, we were more than happy with the conditions, although we couldn’t help but notice a local’s snicker about the advertised 40-inch base, as the occasional bare spot was present on the hill, and as the local’s spouse headed for the ski shop to mend damage caused by hidden rocks.

This lack of a sufficient base limited our customary tree exploration, which we’ll hopefully resume here later in the season.

While steeper runs to the right of the Corona lift were closed in the morning, they opened later in the afternoon, although our short ski day at that point was over. These runs offer thick glades and are rated double-black diamond. 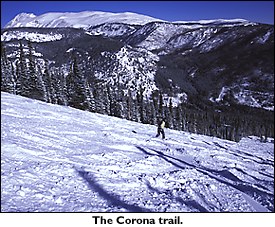 During our time on the hill, we found several fun runs off the Challenge lift, including Psychopath, La Belle Dame, Windmill and Klondike, the latter an excellent but short black run protected by the shadows of trees on either side of the run. Muleshoe, rated an expert run, was nice and long, but, unfortunately, groomed.

Although in the middle of February, this fun day at Eldora gave us a taste of classic Colorado spring skiing – warm, sunny, with a little powder.

Eldora’s ski school was very lively on this Friday and thankfully separated from the rest of the hill, as Eldora’s beginner terrain is way off to the left as one faces the hill.

One annoyance was the many snowmobiles ripping through the resort. We were also surprised to find that Eldora offers snowmobile tours and maintains a small “snowmobile terrain park,” a concept we hope doesn’t gain any traction here or anywhere else. Sorry, but diesel fumes and noisy snowmobiles (other than those used judiciously by the ski patrol) have no place at a ski area, in our humble opinion. The rude conduct of snowmobilers in the Rockies, as reported this winter by both the Los Angeles Times and the Rocky Mountain News, together with a disregard for public opinion in Yellowstone National Park regarding snowmobile use, has left little support for recreational snowmobiling among many.

On the other side of the ecological spectrum, Eldora is served by bus from Boulder, with several departure times throughout the day.

Despite its flaws, Eldora, when smiled upon by the snow gods, has all the ingredients for a great ski experience.
Story and photos by David Iler