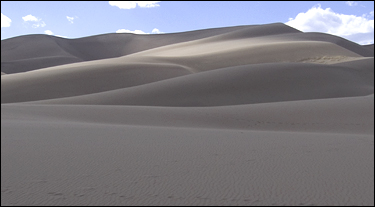 Driving east from the town of Mosca in south-central Colorado, the expansive San Luis Valley dominates the landscape from north to south, majestic in its harsh, overwhelming magnitude.

Here, even one of the West’s most dramatic and unusual destinations — Great Sand Dunes National Park and Preserve — is dwarfed by the valley. The dunes from Mosca appear as a tiny, light brown shelf against the Sangre de Cristo foothills, as if the giant custodian of the legendary valley swept a little sand into a corner.

In May, the mid-day sun baked the valley, causing one to shudder at the prospect of the valley floor in mid-summer, without hat or horse, as surely some misguided fugitive must have done in the early days of human visitation here. This corner of the valley may be considered the “tourist hub,” with three completely incongruous attractions — the alligator farm, the UFO sighting platform and the Great Sand Dunes National Park and Preserve all vying for visitors.

Only in the San Luis Valley could gators, dunes and aliens find a home.

Appearing as if a mirage at the base of the Sangre de Cristo Mountains, the dunes defy the logic of there being rising sand hills in this part of the world. Yet here, dunes, forest, mountain and stream meet to create a diverse ecological montage. A great place to pitch a tent and take a hike.

Despite its remoteness, the scenic campground at the Great Sand Dunes National Park and Preserve was packed tight with campers on May 12, 2006. With a light breeze and hot spring sun, the weather was perfect at this popular tourist destination. 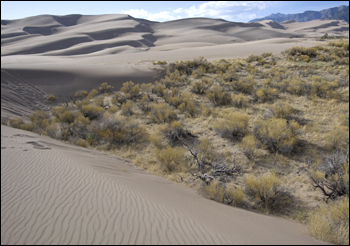 The beauty of the dunes is both the singularity of the rolling sand hills themselves, and their context within the larger southern San Luis Valley. The dunes lap the foothills like a sandy sea. Beyond, to the east, the rugged terrain yields to the lush forests of the Great Sand Dunes Nature Preserve.

The base of the dunes were a short walk from the campground. The sand was compact, making it easy to climb and hike around. Once on the dunes, the feeling was of being in a peculiar, spiritual place — a strange Colorado Sahara. Dotted with patches of sparse vegetation and wind-sculpted pieces of wood, the gritty wind quietly blew the fine sand in shifting, ever-changing shapes, creating in some areas steep inclines with sharp crests, appearing like frozen waves.

Surely, I thought, the forces that conspired to bring this vast accumulation of sand to this place were powerful and persistent. A combination of erosion, wind and water brought the sand to this corner of the valley, creating the tallest dunes in North America. It seemed there’s an ocean just over the next rise of dune, or, at the very least, that the tides of an ancient sea once kissed the aprons of this mysterious sand field, perhaps bringing strange ships from another fabric of time and experience.

Mendano Creek modestly trickled along the southeastern edge of the dunes, the last modern-day evidence of a body of water near these dunes.

Children on the dunes were having a great time, riding down the sloping, sandy inclines on cardboard.

While the main attraction here are the dunes, there are several trails offering passage around the dunes and into backcountry areas of the preserve. There are hikes up to Mosca Pass (9,735 feet), and deeper into the Sangres, to Music Pass, Upper and Lower Sand Creek Lake, and other destinations. 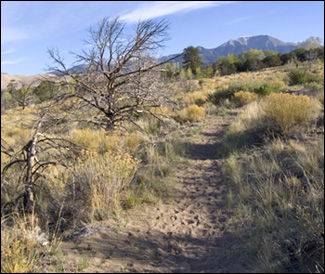 The morning after my arrival, with enough time for a short hike before heading south into New Mexico, I walked north from the campground, headed for the Sand Ramp Trail. From Pinyon Flats, a route leading to the trailhead rises slightly over the campground, offering a striking vista of the southeastern tip of the dunes and the valley beyond. Again, the notion of a sea beyond the dunes was powerful here.

From this vantage point, it appeared as if the dunes “spilled out” of the mountains into the valley. Framed against pine tree and mountain, the dunes seemed more peculiar, not out-of-place like an alligator, but odd, as if one is opening a curtain into a primordial past, a snapshot from millions of years ago.

Along the trail, several scorched pines indicated that a fire passed through in recent years. Indeed, a few “falling tree” advisories were posted along the trail. About a quarter mile from the campground, a stream tumbled down from the hills to the west, marking the Buck Creek campground, which seemed like an ideal place to pack in some gear from Pinyon Flats to set up a campsite, thereby escaping the crowds at the main campground without exerting too much effort. The sandy trail was bordered by pinyon, ponderosa pine and sage, pungent on this bright spring day.

As a sign marked that I was a half-mile along the route, the trail became slightly less sandy, traversing gently up and down along the western edge of the dunes. As is the case with many national parks, a half-mile or so into a trail and the crowds thin noticeably. The cool morning sand spilled over the top of my hiking boots.

Once past the official Sand Ramp trailhead, marked ominously Point of No Return, the sand became less firm, making the hiking more strenuous. As human footprints became less prevalent on the sand, other prints marked the sand, including the thin, textured patterns of snakes. The trail was littered with dry, windblown piece of “driftwood.” Dry creekbeds crisscrossed the trail as a sign marked the Escape Dunes “formation” to the left.

This section of the trail was very exposed to sun and wind, probably not a good place to be in the middle of the summer in the middle of the day. A road paralleling the trail indicated that the way to put in some miles would be to drive up the road and park at the Point of No Return trailhead, although the trail from Pinyon Flats to here was certainly pleasant enough to warrant leaving the car back at the campground.

At this point of the trail, with Marble Mountain and Milwaukee Peak prominent to the north, the cool juxtaposition of high-altitude, 13,000-foot-plus peaks rising above the parched, sandy valley floor completed the canvas of the dominant attributes of the Great Sand Dunes Park and Preserve.

Tracing the route back to the campground, it occurred to me that while the stunning dunes are the marquee attraction here, it is up the lonely trails into the preserve that other, forgotten treasures may be found.