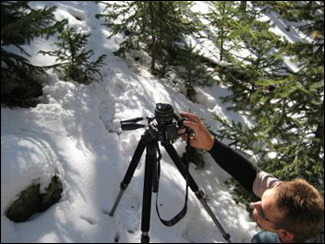 A University of Colorado study conducted at the headwaters of the Colorado River adjacent to Rocky Mountain National Park in north-central Colorado suggests the mountain pine beetle infestation may trigger earlier snowmelt and increase water yields from snowpack that accumulates beneath affected stands of trees.

As a result, there will likely be additional water resources for water managers and more runoff, an interesting consequence of the devastating infestation which has killed more than 4 million acres of lodgepole pine trees in Colorado and southern Wyoming since 1996.

The research team team monitored eight pairs of tree stands, each pair consisting of one live stand and one dead stand roughly an acre each in size, located adjacent to each other and sharing the same topography, elevation and slope.

The team monitored the two distinct phases of pine beetle tree death during the three-year study — the “red phase” in which dead trees still retained red needles, and the “gray phase” in which all of the tree needles and some small branches were shed.

More snow under dead trees
The study showed that there was roughly 15 percent more snow accumulation under the gray phase stands than under living stands or red phase stands, likely due in large part to a lack of “snow interception” by needled tree branches that can cause snowflakes to “sublimate” into gas and return to the atmosphere, said Evan Pugh, CU-Boulder geological sciences department doctoral student.

Snowmelt rates were highest under red phase trees, with snow disappearing up to a week earlier than snow in adjacent, healthy stands even though both received the same amount of snowfall at their bases. Pugh explained that the earlier snowmelt in red phase tree stands is largely due to the amount of needles and branches that drops or is blown from the trees onto on the snow surface, decreasing its solar reflecting power (or albedo) and causing it to absorb more of the sun’s radiation thereby heating up slightly.

Six of the eight healthy tree stands in the study were made up primarily of lodgepole pines, while two were comprised of mixed conifer trees. “One of the hardest parts of this study was to find stands of healthy trees in this area,” said Pugh.

The red phase that occurs following tree death usually lasts about 18 months, and the onset of the gray phase occurs about three or four years after tree death, said Pugh.

Lodgepole pines ripe for beetle infestation
A massive fire in the study area in the late 1800s resulted in most of the succeeding lodgepole pines to be about the same size and age, making them easier targets for pine beetles. Climate change is believed to have played a role in the recent outbreak, as drought conditions in the West have caused living pines to absorb less water, decreasing their ability to produce enough sap to “pitch out” beetles that are attacking them.

More information may be found on the researchers’ The Impact of Pine Beetle Infestation on Snow Accumulation and Melt web page.