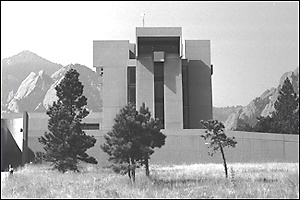 This warming of waters in the central and eastern tropical Pacific lasted from 1990 to mid-1995, the longest in 130 years of records. Using a sophisticated statistical test, the scientists found that such an event would be expected to occur only once in about 2,000 years if the climate were unchanging. The study heightens suspicions that long-term climate change may be affecting ENSO and the Pacific Basin in general.

Appearing in the January 1 issue of Geophysical Research Letters (GRL) is “The 1990-1995 El Nino-Southern Oscillation Event: Longest on Record,” by Kevin Trenberth and Timothy Hoar, both of NCAR’s Climate and Global Dynamics Division.

El Nino traditionally refers to the periodic warming of Pacific waters off the coasts of Peru and Ecuador. However, this warming is only part of ENSO, a large and complex interaction between the tropical Pacific and the global atmosphere. The Pacific warming has been linked to such atmospheric impacts as drought in Australia and parts of South America and flooding across California and the U.S. Gulf Coast.

Through most of this century, El Nino and its counterpart, La Nina (a cooling of the eastern tropical Pacific), have alternated every two to three years. Since the mid-1970s, though, El Nino has predominated. There has been only one significant La Nina in the past 20 years (in 1988-89), while the century’s strongest El Nino occurred in 1982-83 and its longest-lived in 1990-95. It is this most recent and most prolonged ENSO event that Trenberth and Hoar analyze in their GRL paper.

The scientists began with a 100-year record of atmospheric pressure at Darwin, Australia. Pressures at Darwin and Tahiti are often used as an index of the Southern Oscillation, since they average higher and lower than normal (respectively) during El Nino. From December 1989 to May 1995, the pressures at Darwin ran 0.94 millibars (about 0.03 inches of mercury) above the 100-year average. To find how unusual such a prolonged deviation is, Trenberth and Hoar used an autoregressive moving average model. This statistical tool simulated the seasonal fluctuations at Darwin over a stretch of one million years based on rises and falls observed over the century between 1882 and 1981 (before the most recent ENSO event began).

In the model, ENSO events that lasted as long as the 1990-95 event were found to occur only once every 1,000 to 3,000 years. Trenberth and Hoar also evaluated the overall warm conditions in the tropical Pacific over the longer period of 1977-95 and obtained similar results, with a likelihood of occurrence every 1,500 to 2,500 years.

“These results raise questions about the role of climate change,” Trenberth and Hoar wrote. “Is this pattern of change a manifestation of the global warming and related climate change associated with increases in greenhouse gases in the atmosphere? Or is this pattern a natural decadal-timescale variation? We have shown that the latter is highly unlikely.”

The GRL paper also noted that the traditional definition of ENSO may need updating. In the 1990-95 event, Pacific water temperatures off South America–long used to define El Nino–waxed and waned, while those farther west, in the central tropical Pacific, remained above normal. The latter region appears to be tied more closely to ENSO-style atmospheric changes in Australia and the Americas. “It is the [Pacific] basin-scale phenomenon . . . that is linked to global atmospheric circulation and associated weather anomalies.”

According to the National Centers for Environmental Prediction, conditions are now moving toward the first La Nina since 1988-89, with water temperatures running below normal in the central and eastern tropical Pacific.

NCAR is managed by the University Corporation for Atmospheric Research under sponsorship by the National Science Foundation.