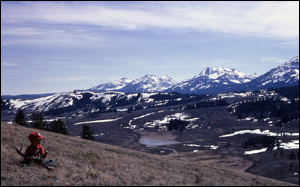 Legal protections for sensitive wildlife habitat in the Gallatin Mountain Range near Yellowstone National Park were upheld by a federal court in Montana, rejecting a challenge to open the area to increased snowmobile traffic.

The ruling, issued in late June, upheld a U.S. Forest Service order restricting snowmobile use throughout much of a congressionally designated wilderness study area in the Gallatin Mountain Range, which borders the northwestern corner of Yellowstone National Park.

In rejecting the group’s challenge, the Montana court agreed with Earthjustice that governing law prioritizes preservation of wilderness quality, instead of snowmobile traffic, in the Gallatin Range.

“The Gallatin Range contains the most extensive undeveloped public lands adjoining Yellowstone park that have not yet received permanent wilderness protection from Congress,” said Earthjustice attorney Timothy Preso, who represented conservation groups in the case.

“This court ruling preserves the wilderness character of this special area, which provides winter-time habitat for elk, moose and rare species such as wolverine and lynx that range between the Gallatin lands and the park itself.”

Earthjustice represented the Montana Wilderness Association, Greater Yellowstone Coalition and The Wilderness Society in the case.